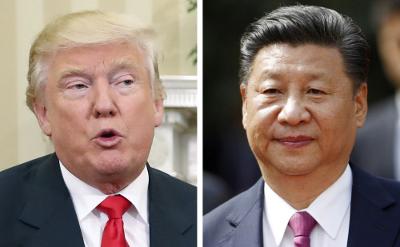 And while Chinese President Xi Jinping defended globalization at the World Economic Forum in Davos, U.S. companies say his government is not practicing what he preached.

An annual survey of business conditions by the American Chamber of Commerce, or AmCham, in China found that 4 out 5 companies feel less welcome in China than before.

Business ties between the United States and China were once considered the bedrock of the two countries’ relationship. But as President-elect Donald Trump prepares to take office in Washington, they have become a major source of friction.

In Davos, Xi made a vigorous defense of free trade, arguing that “pursuing protectionism is like locking oneself in a dark room” in the hope of avoiding danger but, in doing so, cutting off all “light and air.”

“No one will emerge as a winner in a trade war,” Xi said.

But while American companies definitely do not want Trump to start a trade war with China, they are increasingly unhappy with the way Beijing is treating them. They argue that Xi’s government is turning more toward protectionism as its economic growth slows.

“AmCham China still steadfastly supports China’s active and constructive participation in the global economic system,” the group’s chairman, William Zarit, said in a statement. “However, it is becoming apparent that the benefits of globalization are being taken for granted or even forgotten, as the challenges of managing a complex, modern economy increase.”

Those concerns are mirrored in other Western countries. German Ambassador Michael Clauss issued a strongly worded statement Monday complaining of rising concerns among European companies that Chinese ministries are “trying to tilt the playing field towards purely domestic companies.”

“The political leadership in China never ceases to assure us that further opening towards foreign investment, a level playing field between German and Chinese companies as well as protection of intellectual property is a priority,” Clauss said, adding that many companies say their problems have actually increased.

“It often appears that somewhere down the line, political assurances of equal treatment give way to protectionist tendencies,” he said.

AmCham China said economic changes had stalled in China, even as growth slows. Most companies surveyed said revenue was still rising, but more said the investment environment was deteriorating rather than improving.

Their top concern was “inconsistent regulatory enforcement and unclear laws” — often, rules adopted and interpreted to favor local companies over foreign ones.

The second-biggest concern was rising labor costs. The third was “increasing Chinese protectionism,” a factor that did not make the top five last year.

“Despite a long track record of employing and training locals and investing in the local community, when the economy gets tough, the foreign firm is always seen as somehow not friendly to China,” the report quoted a senior country manager in the real estate and development industry as writing.

China is trying to transform its economy to a more consumer- and services-led structure, away from a dependence on heavy industry and exports.

But the “handbrake of regulation is still firmly on” in sectors that should be driving growth, from finance and insurance to logistics and health care, AmCham’s Zarit complained.

In other words, foreign companies are being denied some of the best opportunities on offer in China today.

Trump puts things much more bluntly. China, he says, is “ripping us off” — or even “raping” the United States.

Many U.S. business leaders are worried the next president will start a trade war with China that will seriously damage their interests here. Trump’s threat to raise taxes on American companies that manufacture abroad — repeated in a Washington Post interview this past weekend — would represent an even more direct risk to the interests of many firms.

Instead, what U.S. business leaders want is pressure on China to open its economy further to American investment.

Arthur Kroeber, managing director of Gavekal Dragonomics, an economic research firm, said frictions had risen because the “material fruits” of the United States’ engagement with China had been very unevenly distributed.

But in a client note, he said the problem could not be solved by “browbeating China to change its trade policies or bullying U.S. companies to move factories back onshore” — partly because job losses have had as much to do with cheap automation as with competition from a global labor force.

“A sensible re-set” of U.S.-China economic relations, he argued, should not look backward at trade in goods and manufacturing but instead focus on fostering a better environment for investment, “where the U.S. has more leverage and China has more to give.”

Mei Xinyu, a researcher with the Commerce Ministry, said Trump’s rhetoric would not work on a major economy such as China and warned that if the United States played “low,” China could play “lower.”

“So many members of Trump’s administration have business, big business, in China, they will know the price should there be a trade war,” he said.

Of 462 companies responding to the AmCham China survey, 81 percent said they felt less welcome than before, up from 77 percent the previous year.

When it comes to recruiting staff and retaining talent to work in China, 58 percent cited poor air quality as a challenge, followed by 55 percent who mentioned the high cost of living.

This week, Chinese media reported that Oracle, a U.S. computer technology company, plans to lay off about 200 research and development staffers in Beijing as part of a strategic restructuring, while hard-disk manufacturer Seagate was reported to have shut down its factory in Suzhou and axed 2,000 jobs amid subdued demand.