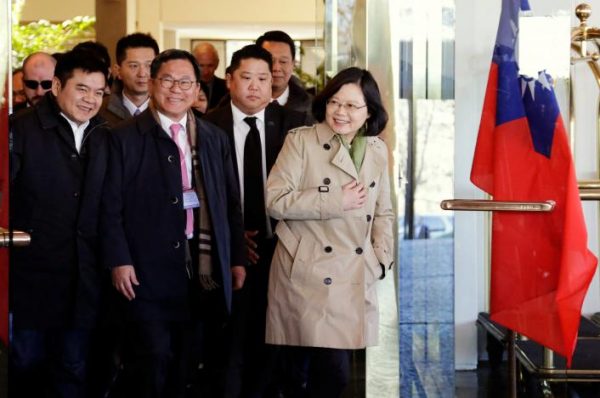 Beijing had asked Washington not to allow Tsai to enter the United States and that she not have any formal government meetings under the one China policy.

A photograph tweeted by Texas Governor Greg Abbott shows him meeting Tsai, with a small table between them adorned with the U.S., Texas and Taiwanese flags. Tsai also met Texas Senator Ted Cruz.

“Sticking to (the one China) principle is not a capricious request by China upon U.S. presidents, but an obligation of U.S. presidents to maintain China-U.S. relations and respect the existing order of the Asia-Pacific,” said the Global Times editorial on Sunday. The influential tabloid is published by the ruling Communist Party’s official People’s Daily.

Trump triggered protests from Beijing last month by accepting a congratulatory telephone call from Tsai and questioning Washington’s commitment to China’s position that Taiwan is part of one China.

“If Trump reneges on the one-China policy after taking office, the Chinese people will demand the government to take revenge. There is no room for bargaining,” said the Global Times.

Trump has said that he will not meet with any foreign leaders before he takes office, but left open the possibility of meeting Tsai after his inauguration on Jan. 20.

Cruz said some members of Congress had received a letter from the Chinese consulate asking them not to meet with Tsai during her stopovers.

“The People’s Republic of China needs to understand that in America we make decisions about meeting with visitors for ourselves,” Cruz said in a statement. “This is not about the PRC. This is about the U.S. relationship with Taiwan, an ally we are legally bound to defend.”

Cruz said he and Tsai discussed upgrading bilateral relations and furthering economic cooperation between their countries, including increased access to Taiwanese markets that will benefit Texas ranchers, farmers and small businesses.

Tsai’s office has stayed low key about her U.S. meetings, saying on Monday only that Tsai talked with “friends” during her private and unofficial stopover. Tsai will stopover on Jan. 13 in San Francisco on her way back to Taiwan.

In a dinner speech Saturday to hundreds of overseas Taiwanese, Tsai said that the United States holds a “special place in the hearts of the people of Taiwan” and that the self-ruled island via bilateral exchanges has provided more than 320,000 jobs directly and indirectly to the American people, according to a statement from her office Monday.

China is deeply suspicious of Tsai, who it thinks wants to push for the formal independence of Taiwan, a self-governing island that Beijing regards as a renegade province, ineligible for state-to-state relations.

The Global Times, whose stance does not equate with government policy, also targeted Tsai in the editorial, saying that the mainland would likely impose further diplomatic, economic and military pressure on Taiwan, warning that “Tsai needs to face the consequences for every provocative step she takes”.

“It should also impose military pressure on Taiwan and push it to the edge of being reunified by force, so as to effectively affect the approval rating of the Tsai administration.”