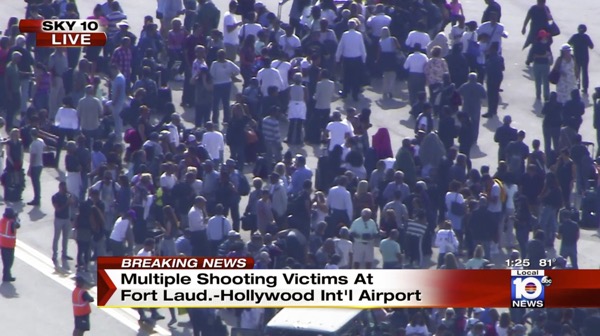 A gunman opened fire Friday in a crowded baggage claim area at the airport in Fort Lauderdale, killing five people and wounding eight others, officials said.

“The gunman is in custody and unharmed,” the Broward County sheriff, Scott Israel, said, adding that he was being interviewed by F.B.I. agents and county investigators. The injured have been taken to an area hospital.

The sheriff said investigators were trying to determine the motive of the gunman, who was identified by Senator Bill Nelson of Florida as Esteban Santiago. Mr. Nelson said the gunman was carrying a military identification.

“He was a lone shooter and we have no evidence at this time that he was acting with anyone else,” Barbara Sharief, a Broward County commissioner, said.

The Fort Lauderdale-Hollywood International Airport authority said on Twitter that the shooting had taken place in the baggage claim area in Terminal 2, which is used by Delta Air Lines and Air Canada. The baggage claim would have been outside the secure area of the airport.

Sheriff Israel would not say whether the gunman was a passenger on a flight or had come to airport from the Fort Lauderdale area.

On Twitter, President-elect Donald J. Trump said that he was “monitoring the terrible situation in Florida” and that he had spoken to Gov. Rick Scott, who is on his way to the airport.

The shooting in a crowded post-holiday airport, which began shortly before 1 p.m., set off a panic as travelers rushed out of the terminal.

I'm at the Ft. Lauderdale Airport. Shots have been fired. Everyone is running.


“Everyone is running,” Ari Fleischer, the former White House press secretary for President George W. Bush said on Twitter just before 1 p.m. Video footage showed hundreds of people waiting on the tarmac as law enforcement officers rushed to the scene.

Mr. Fleischer later tweeted that the situation had calmed “but the police aren’t letting anyone out of the airport.”

About 90 minutes after the shooting, panic broke out briefly with passengers and police officers running frantically. Passengers in other parts of the airport were reporting shots being fired, and dozens of officers could be seen with automatic weapons drawn, directing a large group of travelers.

The Broward County sheriff said initially that it was investigating reports of additional shots being fired, but Sheriff Israel said during the news conference that the reports were false.

Witnesses told news outlets that the gunman, who appeared to be a man in his 20s wearing a “Star Wars” T-shirt, had been firing into the crowd at baggage claim. The Broward County Sheriff Israel, said that no shots were fired by law enforcement, countering reports that the gunman had been shot by the police.

John Schlicher, who told MSNBC that he witnessed the attack, described the gunman as a “slender man” who was “directly firing at us” while passengers waited for their bags to come off the carousel.

“I put my head down and prayed,” Mr. Schlicher told the television network.

Dr. Michael Massa, who was traveling home to Los Angeles from Europe, said they heard shots shortly after getting into the terminal.

“We ran from the terminal out to the tarmac,” Dr. Massa said, who added that officials then directed them toward the east side of the airport where they were waiting behind an airport building.

At one point, he said, officials made everyone go single file, hands up, and then patted everyone.

Local television news stations showed video footage of medics taking care of a bleeding victim outside the airport. News helicopters showed hundreds of people standing on the tarmac as an ambulance drove by.

With the airport shut down, the Federal Aviation Administration said that flights headed to Fort Lauderdale had been delayed or diverted to other airports.

Live images from WPLG television showed dozens of people milling around on a runway.

The last major outbreak of gun violence at a busy American airport was in 2013, when a man carrying an assault rifle and 100 rounds of ammunition began firing at a security checkpoint at Los Angeles International Airport, killing a Transportation Security Administration officer, sending morning travelers fleeing in panic and paralyzing one of the world’s busiest airports for hours. Three other people were shot and several others were injured in the melee.

Airport police officers chased him through the terminal as he continued to fire before shooting him near a departure gate and arresting him.

Security officials in Los Angeles announced Friday that they had stepped up security at the main terminals in the airport. “Airport Police are deploying additional resources into our terminals and an increased presence in the Central Terminal Area,” the airport police announced on Twitter.