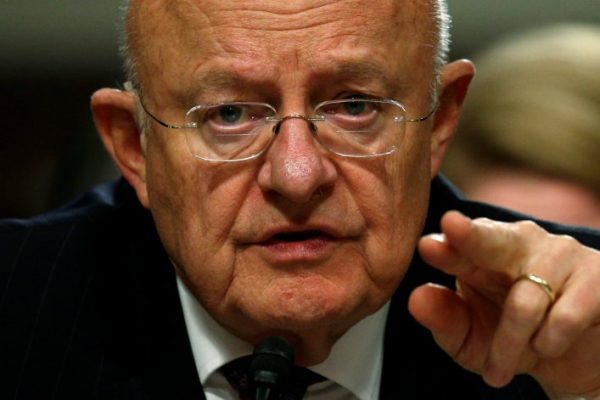 Director of National Intelligence James Clapper said on Thursday that Russia cyberattacking campaigns are “multi-faceted” and also include fake news. “The hacking was only one part of it, and it also entailed classical propaganda, disinformation, fake news.” Clapper’s testimony confirms suspicions that, in addition to hacking into U.S. political institutions like the Democratic National Committee, Russia helped propagate and spread fake news and campaign is continuing
Share:
By Adam Entous and Greg Miller
Senior officials in the Russian government celebrated Donald Trump’s victory over Hillary Clinton as a geopolitical win for Moscow, according to U.S. officials who said that American intelligence agencies intercepted communications in the aftermath of the election in which Russian officials congratulated themselves on the outcome.

The ebullient reaction among high-ranking Russian officials — including some who U.S. officials believe had knowledge of the country’s cyber campaign to interfere in the U.S. election — contributed to the U.S. intelligence community’s assessment that Moscow’s efforts were aimed at least in part at helping Trump win the White House.

Other key pieces of information gathered by U.S. spy agencies include the identification of “actors” involved in delivering stolen Democratic emails to the WikiLeaks website, and disparities in the levels of effort Russian intelligence entities devoted to penetrating and exploiting sensitive information stored on Democratic and Republican campaign networks.
Those and other data points are at the heart of an unprecedented intelligence report being circulated in Washington this week that details the evidence of Russian interference in the 2016 presidential campaign and catalogues other cyber operations by Moscow against U.S. election systems over the past nine years.

The classified document, which officials said is over 50 pages, was delivered to President Obama on Thursday, and it is expected to be presented to Trump in New York on Friday by the nation’s top spy officials, including Director of National Intelligence James R. Clapper Jr. and CIA Director John Brennan.

U.S. officials declined to say whether the intercepted communications were cited in the classified version of the report commissioned by Obama, and they emphasized that although the messages were seen as strong indicators of Moscow’s intent and clear preference for Trump, they were not regarded as conclusive evidence of Russian intelligence agencies’ efforts to achieve that outcome.

“There are a variety of different exhibits that make the case, different factors that have provided the intelligence community with high confidence” that Russia sought in part to help elect Trump, said a second senior U.S. official who has reviewed intelligence findings on Russia’s cyber operations.

Officials emphasized that “signals intelligence,” as such communication is known, is treated by analysts with caution because statements can be taken out of context and sophisticated adversaries including the Kremlin are adept at spreading disinformation.

U.S. officials who have reviewed the new report said it goes far beyond the brief public statement that Clapper and Homeland Security Secretary Jeh Johnson issued in October, accusing Russia of having “directed” cyber operations to disrupt the U.S. election, and concluding, in a reference to Russian President Vladi­mir Putin, that “only Russia’s senior-most officials could have authorized these activities.”

In December, during a closed door briefing with senators, the CIA shared a secret assessment. The agency concluded it was now “quite clear“ that Russia’s goal was to help Donald Trump win the White House. (Jason Aldag/The Washington Post)
The new report incorporates material from previous assessments and assembles in a single document details of cyber operations dating back to 2008. Still, U.S. officials said there are no major new bombshell disclosures even in the classified report. A shorter, declassified version is expected to be released to the public early next week.

Russia’s alleged role in the 2016 election and the question of how the United States should respond have become bitterly polarizing issues in Washington, sowing discord among Republicans on Capitol Hill, complicating the transition between the Obama and Trump administrations, and exacerbating an increasingly toxic relationship between the president-elect and U.S. spy services.

Senior lawmakers have called for a full investigation of the Russian hacking. Appearing before the Senate Armed Services Committee on Thursday, Clapper said that Moscow’s cyber assault on the election went beyond interference and into “activism.”

Obama last week announced a series of measures designed to punish Russia, actions he characterized as “a necessary and appropriate response to efforts to harm U.S. interests.” Obama moved to impose economic sanctions on Russian intelligence agencies, expelled dozens of alleged Russian intelligence operatives from the United States, and shuttered two compounds that for decades had purportedly served as retreats for Russian diplomats but were described by the administration as locations for espionage activities.
Meanwhile, Trump continued his string of Twitter attacks, accusing U.S. intelligence agencies — with the word “intelligence” set off in quotation marks — of delaying a planned briefing on Russia and the election, a charge that U.S. officials disputed. He also appeared to side with WikiLeaks founder Julian Assange, who has denied that his organization got the hacked emails from Russia, over U.S. spy agencies, which think that WikiLeaks got the material through middlemen with ties to the Kremlin.

Trump appeared to retreat on Thursday, accusing the “dishonest media” of misrepresenting his comments about Assange. “The media lies to make it look like I am against ‘Intelligence,’ ” he said, “when in fact I am a big fan!”

U.S. officials said the captured messages, whose existence has not previously been disclosed, added to the confidence level at the CIA and other agencies that Putin’s goals went beyond seeking to undermine confidence in America’s election machinery and ultimately were aimed at tilting a fiercely contested presidential race toward a candidate seen as more in line with Moscow’s foreign policy goals.

Even so, the messages also revealed that top officials in Russia anticipated that Clinton would win and did not expect their effort to achieve its goal.

Russian officials “were as surprised as the rest of the world,” said the second U.S. official who, like others, spoke on the condition of anonymity to discuss intelligence matters.

“In this case, you do learn things after the fact based on how they feel about it,” the first official said, adding that the intercepts added to the intelligence community’s “shifting level of confidence.”

The intercepts also echoed some public comments in Moscow. “Trump understood the mood of the people and kept going until the end, when nobody believed in him,” Putin said at a news conference last month, adding with a wry smile, “except for you and me.”

U.S. intelligence officials think that Putin has for years held a grudge against Clinton, whom he accused of fomenting demonstrations in Moscow in 2011 and 2012 that embarrassed Putin and rattled the former KGB operative’s confidence in his grip on power.

Russia’s elite spy services have for years used cyberespionage capabilities to gather information on U.S. policymakers and political candidates — as the United States does on Russia. But Moscow’s decision to dump thousands of stolen emails into public view on WikiLeaks was seen as a provocative departure from the traditional lanes of espionage, U.S. officials said.

Clapper on Thursday said there is a difference between “an act of espionage, which we conduct, as well, and other nations do, versus an attack.”

Russia’s initial objective may have been merely to meddle and undermine the legitimacy of an assumed Clinton victory. But as Trump captured the GOP nomination and showed that he could remain competitive with Clinton, Russia’s aims became more ambitious, officials said. The final months of the race saw a steady stream of leaked emails that damaged Clinton’s candidacy, without any corresponding release to embarrass Trump.