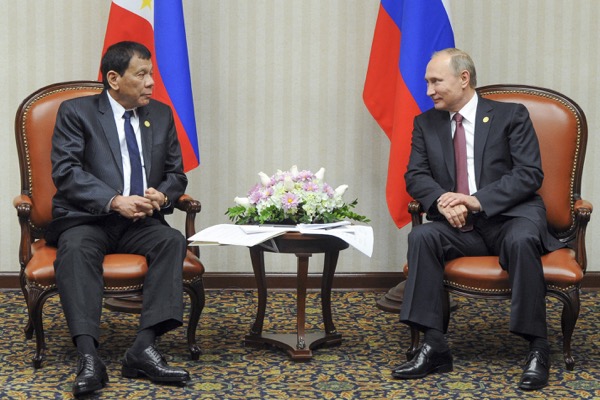 Russia is ready to supply the Philippines with sophisticated weapons including aircraft and submarines and aims to become a close friend of the traditional U.S. ally as it diversifies its foreign ties, Russia’s ambassador said on Wednesday.

Philippine President Rodrigo Duterte has thrown the future of Philippine-U.S. relations into question with angry outbursts against the former colonial power and some scaling back of military ties while taking steps to boost ties with China and Russia.

Illustrating the transformation of Philippine foreign relations since Duterte took office in June, two Russian warships are on four-day visit to Manila this week, the first official navy-to-navy contact between the two countries.

Russian Ambassador Igor Anatolyevich Khovaev took the opportunity to hold a news conference on board the anti-submarine vessel Admiral Tributs.

He said he understood that the Philippines was intent on diversifying its foreign partners.

“It’s not a choice between these partners and those ones. Diversification means preserving and keeping old traditional partners and getting new ones. So Russia is ready to become a new reliable partner and close friend of the Philippines,” he said.

The Russian navy visit comes less than a month after Duterte sent his foreign and defence ministers to Moscow to discuss arms deals after a U.S. senator said he would block the sale of 26,000 assault rifles to the Philippines due to concern about a rising death toll in a war on drugs launched by Duterte.

Khovaev said Russia had a range of weapons to offer.

“We are ready to supply small arms and light weapons, some aeroplanes, helicopters, submarines and many, many other weapons. Sophisticated weapons. Not the second-hand ones,” Khovaev said.

“Russia has a lot to offer but everything will be done in full compliance with international law.” .

He said it was too early to talk about the scope of military cooperation but, in a clear reference to the United States, said old allies should not worry.

“Your traditional partners should not be concerned about the military ties … If they are concerned, it means they need to get rid of clichés,” he said.

Rear Admiral Eduard Mikhailov, head of the Flotilla of the Russian Navy Pacific Fleet, said on Tuesday Russia wanted to hold maritime exercises with the Philippines to help combat terrorism and piracy.

The United States and the Philippines have been holding naval exercises annually but Duterte has decided to reduce the number of exercises and to move naval drills away from the disputed South China Sea, to reassure China, which is suspicious of U.S. military movements in the disputed waters.