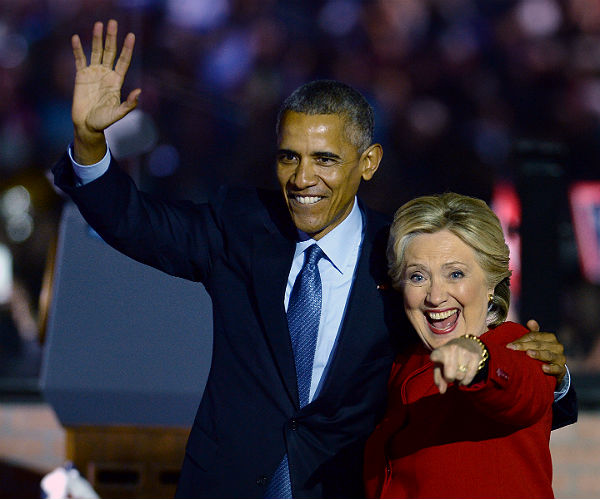 President Barack Obama has once again won the annual US poll of the most admired man in the world, with President-elect Donald Trump providing some competition. Hillary Clinton is the most admired woman, the new poll says.

For the ninth year in a row, Obama was named the most admired man in America, winning 22 percent of the vote in Gallup’s yearly poll. Trump came in second with 15 percent of the vote, making it Obama’s narrowest margin of victory in the end-of-year survey.

The results were announced Wednesday amid a seeming spat between the two men. In the morning, Trump tweeted that the transition between administrations was no longer going smoothly, thanks to “inflammatory… statements and roadblocks” made by Obama. However, in the afternoon, Trump told reporters outside his home in Mar-a-Lago, Florida that the process, in fact, was going “very, very smoothly.”

The two men have publicly disagreed recently over the US’s relationship with Israel.

It’s not unusual for a sitting president to win Gallup’s most admired poll; it’s happened 58 times in the 70 years the question has been asked, dating back to 1946. The last time the incumbent president wasn’t the most admired man was in 2008, when Obama beat out the deeply unpopular President George W. Bush. In doing so, Obama became only the second president-elect to win the title after Dwight D. Eisenhower in 1952.

Obama currently holds a 56 percent approval rating, while 40 percent of Americans disapprove of the job he is doing, according to a separate Gallup poll that is compiled daily.

In the 2016 poll, Pope Francis came in third place, while Senator Bernie Sanders (I-Vermont), came in fourth. Reverend Billy Graham, a perennial favorite, rounded out the top five. Vice President-elect Mike Pence, who was not on the list last year, placed 10th.

Historically, Obama’s nine first-place finishes now make him Americans’ second most admired man behind Eisenhower, who placed atop the poll 12 times. Hillary Clinton, with her 21st victory as the most admired woman, is far and away the historical favorite; former First Lady Eleanor Roosevelt comes in second, winning the nod 13 times.

First Lady Michelle Obama placed second on this year’s list with 8 percent of the vote, compared to Clinton’s 12 percent. Former first ladies have finished first 35 times in the 67 years the question has been asked. Clinton’s highest ratings came when she was serving as secretary of state, while her lowest ratings were the years of her two presidential campaigns. Despite the lower popularity in 2008 and 2016, however, she has remained the most admired woman since 2002, after losing the top spot to then-First Lady Laura Bush in 2001. Clinton also lost out in 1995 and 1996, both times to Mother Teresa.

Clinton’s win as the most admired woman comes shortly after she was named to GQ’s list of least influential people of the year. In early December, Trump was named Time’s Person of the Year.