Petraeus: “US must support Syrian opposition” 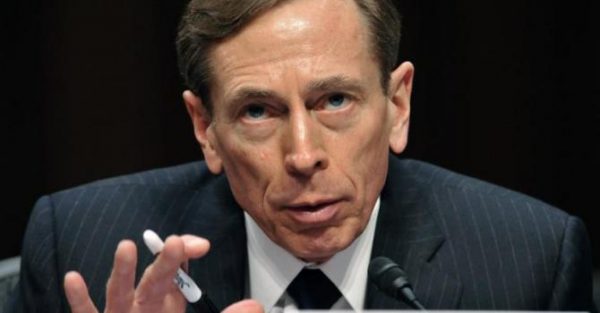 Manama, Bahrain- The United States must support Syrian opposition as part of efforts to eradicate ISIS and Jabhat Fateh al Sham in specific and weeding out terrorism from the region, in general, said former CIA chief US General (Retd.) David Petraeus.

Petraeus was speaking during an opening debate at the IISS Manama Dialogue 2016 which kicked off at the Ritz Carlton Hotel and Spa on Friday with a keynote address by the British Foreign Secretary, Boris Johnson.

“President Assad can’t be part of long term solution to Syria, but he shouldn’t be pushed out until we know what will replace him,” he said, adding that dialogue over Syria is especially important.

Held under the patronage of His Royal Highness Prince Salman bin Hamad Al Khalifa, the 1st Deputy Prime Minister, the Crown Prince and Deputy Commander in Chief of Bahrain Defense Forces (BDF), the 12th Manama Dialogue, is being held in the Kingdom of Bahrain with focus on constructive and collective responses to the conflicts in Syria and Iraq, instability in Libya and Yemen, the menace of violent extremism, and debate the regional security architecture. The future of US policy – a month after the Presidential elections – as well as European and Asian engagements in the region will also be at the center of the discussions.

On fight against terrorism, Petraeus termed it a struggle of generation and believes that this war cannot be won half-heartedly rather it needs resources.

Touching upon the efforts of Iraqi forces to drive the Daesh and other terrorists from Mosul he remained optimistic about the outcome of the ongoing operations. “Iraqi security forces will definitely retake Mosul – the real battle is to bring inclusive politics to Iraq.”

“US and Russia have some converging interests – a new President could actually do something good with this relationship,” he said.

He was joined by His Royal Highness Prince Turki Al Faisal Al Saud, Chairman of the Board, King Faisal Center for Research and Islamic Studies, Former Saudi Ambassador to the US and UK; Ayad Allawi, Vice President of Iraq and Ellen Laipson, Fellow and President Emeritus, Henry L Stimson Center, US Member of the Council IISS.

Talking about the Middle East Peace Process he said that there was no question of US commitment to two state solution in Israel and Palestine, but getting to it has eluded many Presidents.

HRH Prince Turki urged the GCC States to come together seek a solution to Iran issue in anticipation that what happens once 15-year Iran nuclear deal has expired.

“Very difficult to turn blind eye to Iran’s regional interventions but we should try to focus on commonalities,” HRH Prince Turki, said, adding that more than six million Syrian were forced to leave their country and live as refugees in various part of the world.

“There are 2.5million refugees are in the Kingdom of Saudi Arabia, and millions moved to others regions. One should look what Iran is doing in Syria, Iraq and Yemen and how such policy of hegemony is serving as a main reason of destabilization. When we criticized Iran, we criticise wrong polices of its leadership and don’t mean Iranian people as we have very good ties at people to people level. In this part of the world everyone wants to have good ties with Iran but no one will accept destruction or Iran is seen sending armies to other countries,” HRH said.

“Only area of dramatic change might be Iran policy – Trump’s advisors may go too far; even towards regime change,” Ellen Laipson, said adding that US President-elect Donald Trump is talking to getting briefings from President Obama a lot – he will walk back from some of the criticisms he made during the campaign.” “Trump wants to change the US-Russia relationship; he may abandon Syrian opposition if he thinks Russia is the solution,” she added.

Iraq’s Deputy President Ayad Allawi made a categoric demand from the United States, that it should fully commit Middle East security by supporting politically and militarily to fight terrorism. “We don’t know the reason behind Iran’s policies of interventions across the Middle East and to seek a durable solution to this persistent problem we need a comprehensive dialogue with Iran,” he said.