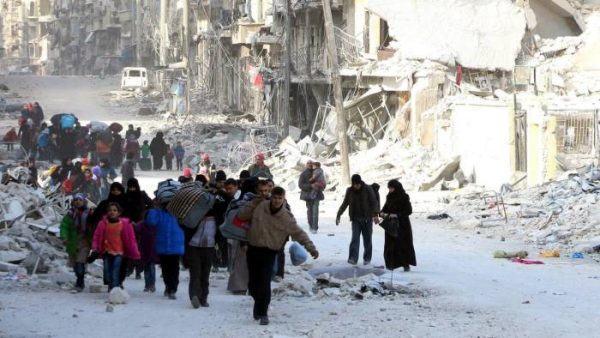 Despite pleas from increasingly cornered opposition fighters, Western countries and the United Nations, Assad also rejected talk of a ceasefire in Aleppo.

Repeated diplomatic efforts this week to end the fighting have stalled, with US Secretary of State John Kerry and Russian counterpart Sergei Lavrov failing to make a breakthrough in their latest talks on Wednesday.

In a wide-ranging interview with Syrian daily Al-Watan, Assad was confident of victory in Aleppo, though he admitted retaking the city would not end the country’s conflict entirely.

“It’s true that Aleppo will be a win for us,” Assad said.

“Let’s be realistic — it won’t mean the end of the war in Syria,” Assad said. “But it will be a huge step towards this end.”

Regime forces have retaken about 80 percent of former rebel territory in Aleppo since launching an all-out offensive three weeks ago to recapture Syria’s second city.

After a highly symbolic retreat from Aleppo’s Old City, the rebels on Wednesday called for a five-day ceasefire to allow for the evacuation of thousands of civilians still in opposition-held territory.

But Assad’s government has said a truce is only possible after a full rebel withdrawal from Aleppo, and opposition fighters have rejected any talk of abandoning the city.

Asked about the possibility of a truce, Assad said: “It’s practically non-existent, of course”.

‘Must have been terrifying’

Assad’s forces, backed by foreign fighters from Iran and Lebanon’s Shiite Hezbollah movement, were continuing to advance on Thursday, the Syrian Observatory for Human Rights said.

The Britain-based monitoring group said there was heavy rocket fire on several rebel-held districts and fighting in the Salaheddin and Bustan al-Qasr neighbourhoods.

The assault has prompted a mass exodus of residents, with the Observatory saying at least 80,000 have fled their homes.

Syrian troops and aid groups have been helping to evacuate residents from newly retaken areas of east Aleppo, where civilians lived for months under heavy bombardment and a regime siege.

The International Committee of the Red Cross said Thursday it carried out an operation overnight with Syria’s Red Crescent to evacuate 150 civilians, many disabled or sick, from a health facility in the Old City.

These patients and civilians had been trapped in the area for days because of heavy clashes nearby and as the front line kept drawing closer,” said ICRC Syria delegation head Marianne Gasser.

“Many of them cannot move and need special attention and care. It must have been terrifying for them,” she said.

It was unclear how many civilians remained in rebel-held territory, but there were an estimated 250,000 in east Aleppo prior to the latest offensive.

Save the Children said tens of thousands of children were “sitting targets” in the fighting.

“It defies belief that after nearly six years of suffering through this war, the international community is still willing to stand by as civilians are bombed with seeming impunity,” the group’s Syria director Sonia Khush said.

Kerry said he and Lavrov had talked in Hamburg, Germany, on Wednesday for about an hour “about the extraordinarily dire situation in Aleppo and we exchanged some ideas about it.”

He said the two intended “to connect in the morning to see where we are.”

Moscow and Washington have traded blame this week over a series of failed efforts to bring about a ceasefire.

Moscow is a key Assad ally and launched an air war in support of his forces last year, while Washington and other Western nations have supported rebel forces.

The government offensive has killed 384 civilians in east Aleppo, including 45 children, the Observatory says.

Rebel fire into the west of the city has killed at least 105 people, including 35 children, in the same period, it says.

Driving rebel forces from Aleppo would mark the biggest victory yet for Assad’s forces in the country’s civil war, which began in 2011.

In his interview, Assad said a rebel loss in Aleppo “will mean the transformation of the course of the war across Syria” and leave opposition factions and their backers with “no cards left to play”.

Assad pledged to fight rebels even beyond Aleppo.

“Terrorists are present elsewhere — even if we finish with Aleppo, we will continue our war against them,” he said.