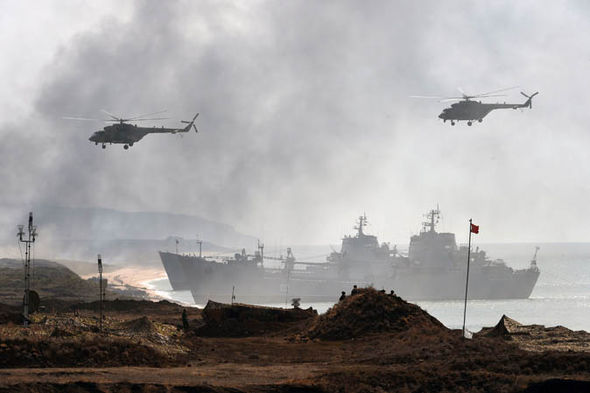 By TOM BACHELOR – Warships from Russia’s Black Sea Fleet have taken up position near the disputed Crimean peninsula – which was illegally annexed from Ukraine in 2014 – to help strengthen the air defences.

The aggressive land grab plunged Ukraine-Russia and east-west relations to their lowest point in years and threatened a new Cold War.

Moscow has warned that the war games will not disrupt international flights.

The drills come more than two years after a Malaysia Airlines jet was downed over Ukraine during fighting with Russian-backed separatist rebels.

A military source in Crimea told the Reuters news agency: “Warships of the Black Sea Fleet have taken up positions near Crimea’s western coast for the duration of Ukraine’s planned missile tests from December 1-2.

“The ship’s air defence units have been put on a higher state of alert.

“Their equipment is designed in the first instance to shoot down heavy anti-ship missiles and cruise missiles.

“Together with land-based air defence units on the peninsula, the ships have thrown up a practically impenetrable shield against the enemy’s rockets.”

Vladimir Krizhanovsky, a Ukrainian military official, earlier said that the exercises had begun and that everything was going smoothly.

He said: “The tests are being carried out in accordance with international law.”

He said they were taking place at least 18.64 miles from Crimean air space.