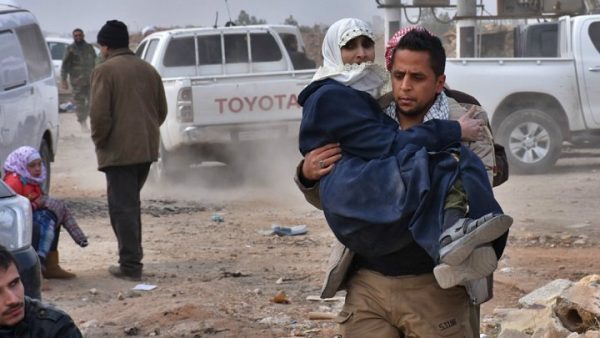 More than 50,000 Syrians have joined a growing exodus of terrified civilians from east Aleppo, a monitor said Wednesday, as the UN Security Council was set for emergency talks on fighting in the city.

Civilians have poured out of the rebel-held east in recent days, with parents carrying children and the young pushing the old in wheelchairs or makeshift carts as they flee.

Some have arrived in government-held or Kurdish-controlled territory with overstuffed suitcases and bags of their possessions, but others have come empty-handed, with only the clothes on their backs.

In the newly recaptured neighbourhood of Jabal Badro, hundreds of people massed to board government buses taking people to west Aleppo.

Government forces and allied fighters have seized a third of the rebel-held east of Aleppo since they began an operation to recapture all of the battered second city just over a fortnight ago.

The loss of Aleppo would be the biggest blow for Syria’s opposition since the conflict began in March 2011 with anti-government protests, before spiralling into a civil war.

The UN has for months sought access to the east, and earlier this month presented a plan to deliver aid and evacuate wounded and sick civilians.

But it has failed to secure agreement from the government, even as the army’s siege has led to dwindling food supplies and the exhaustion of remaining international aid provisions in the east.

The UN Security Council is to hold an emergency meeting later Wednesday on the situation, receiving a briefing from a UN humanitarian official and the UN’s peace envoy Staffan de Mistura.

Syria’s opposition National Coalition said it was working with France on a draft UN resolution seeking an immediate ceasefire in Aleppo, though Russia — a staunch ally of Damascus — was likely to veto such a proposal.

As the government has advanced, more than 50,000 people have left rebel-held districts, the Observatory said Wednesday.

It said more than 20,000 people had left to government-held neighbourhoods, with another 30,000 going to Kurdish-controlled districts.

Many others have travelled south into the remaining territory held by rebels.

“The situation of those fleeing is desperate,” said Pawel Krzysiek, head of communications for the International Committee of the Red Cross (ICRC) in Syria.

Syria’s Red Crescent is offering assistance in government-held areas, but does not yet have access to east Aleppo.

“I can only imagine how difficult the situation must be for people who fled into the places where aid workers and supplies are not or scarcely available,” Krzysiek said.

“Our priority now is to get to all people in need.”

The government’s advance on the ground has been accompanied by heavy bombardment, with air strikes, barrel bomb attacks and artillery fire pounding rebel-held neighbourhoods.

On Wednesday morning, 21 civilians including two children were killed in government artillery fire on the Jubb al-Qubbeh district in east Aleppo, the Observatory said.

Observatory head Rami Abdel Rahman said at least eight of the dead were civilians who had fled the Tariq al-Bab neighbourhood, now a front line between rebels and advancing government troops.

He said dozens more had been wounded in the attack and many people were still trapped under the rubble of collapsed buildings.

The monitor says nearly 300 civilians, including 33 children, have been killed in east Aleppo since the latest government assault began on November 15.

Another 48 civilians have been killed in west Aleppo, according to the monitor.

State news agency SANA said eight civilians including two children had been killed in rebel fire on several districts in the city’s west on Wednesday.

The violence in the city has prompted international concern, though there has been little sign of a plan to intervene.

UN rights chief Zeid Ra’ad Al-Hussein on Wednesday said civilians in eastern Aleppo faced “a nightmare which clearly violates the most basic norms of human rights and any shred of human decency.”

“Pounded by accelerating bombardment, deliberately deprived of food and medical care, many of them — including small children — report that they are simply waiting for death,” he said.

Israel, which is still technically at war with Syria, has largely limited its involvement in its neighbour’s five-year conflict.

But it has carried out periodic strikes in the country, often targeting Lebanon’s Hezbollah, which is fighting in Syria in support of government forces.