What Trump’s Presidency May Mean for Investors

After a historic, hard-fought campaign, businessman and real estate investor Donald Trump is set to become the 45th president of the United States. Given pre-election expectations, a Trump victory may not have been fully reflected in market prices, which could lead to a degree of near-term volatility as investors digest the news. In the end, however, what matters most to investors are key economic drivers like growth, interest rates, investor sentiment, and productivity gains. These drivers often move to their own rhythms, independent of whichever officials or parties happen to be in power.

That said, there may be several notable ways the Trump presidency could impact the economy and markets( some of the issues may apply only to US based investors ):

• Taxes–During the campaign, Trump offered a number of key tax proposals, including moving from six to three tax brackets, streamlining deductions, repealing the estate tax, and cutting the corporate tax from 35% to 15%. He also proposed a one-time repatriation tax of 10% on corporate profits held overseas—a move that could enable corporations to use those funds for capital expenditures, dividends, or share repurchases. It’s worth noting, however, that some of these reforms may have a hard time winning approval by Congress. Many believe the likeliest to pass may be some form of tax repatriation and a watered-down tax cut on individuals and corporations.
• Health care–One of Trump’s central campaign promises has been the full repeal of the Affordable Care Act (ACA). He also proposed the sale of health insurance across state lines and more favorable tax treatment on premiums. Whether Trump will be successful with ACA repeal will depend on the makeup and disposition of Congress, though it’s likely he’ll at least be able to roll back key parts of the law via presidential powers and the budgetary process. This could potentially boost several sectors of the health care industry, including pharmaceuticals. On the other hand, hospitals and Medicaid providers could suffer.
• Regulatory environment–Based on Trump’s campaign proposals, he’s likely to seek to relax or overturn an array of government regulations, including Dodd-Frank, the sweeping reform of Wall Street that passed in the wake of the 2008 financial crisis. In terms of energy policy, Trump has mentioned loosening restrictions on fracking and offshore drilling. Taken together, these actions could serve to benefit companies in a range of sectors—from financials to traditional energy companies, especially those focused on domestic oil exploration and production.
• U.S. dollar and foreign affairs–Since Trump does not have traditional foreign policy experience, this remains an area of some uncertainty. However, he’s consistently spoken out against free trade, and has had particularly contentious words for both Mexico and China. It’s possible that this may have just been campaign rhetoric. If not, and if Trump pursues policies in keeping with what he’s said during the campaign, trade tensions could escalate, and demand for U.S. dollars could wane. Investors may find both issues concerning, especially since strong demand for U.S. dollars has helped minimize inflation and keep yields on U.S. Treasuries at historically low levels.

Ultimately, only time will tell what the market impact of the Trump presidency will be. As with any presidential transition, especially from one party to the other, there may be some bumps in the days and weeks to come. With history as our guide, it’s likely, however, that these will subside as markets adjust. As always, we believe it’s best to look past the day-to-day fluctuations of the markets and focus on the long term.

Looking beyond the election results, there was generally good news for the U.S. economy in October. The October jobs report was solid (161 thousand new jobs—not too hot and not too cold), and the first estimate of gross domestic product for the third quarter came in at 2.9%, well above expectations. Housing numbers were also strong. As a result of these and other reports, most analysts are expecting that, when the U.S. Federal Reserve meets in December, it will increase the federal funds rate from its current level of 0.25%–0.50%. This would be just the second increase in more than 10 years. 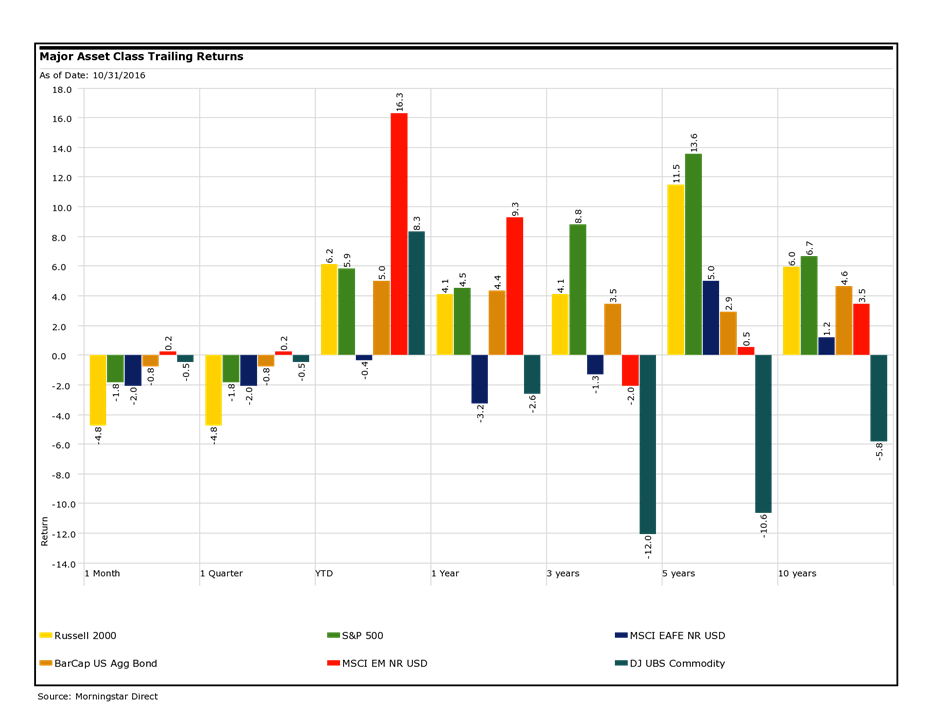 The U.S. stock market finished lower in October—and in the case of small caps, significantly so. Market action was generally volatile, as investors traded not only on fundamentals, but also on election-related uncertainty.

The large-cap-oriented S&P 500® Index dropped 1.82% during the month, but is still up 5.87% year to date. U.S. small caps fared even worse, with the small-cap-oriented Russell 2000 Index falling 4.75% in October. However, since small caps posted strong gains earlier in the year, the index is still holding on to a reasonably healthy year-to-date gain of 6.16%.

October wasn’t especially kind to individual sectors, either. Based on the S&P 500 sector indexes, financials and utilities were the strongest categories for the month—and the only ones to finish in positive territory. (Financial companies have benefited from higher expectations for a December rate hike, which can potentially help them generate higher revenue.) Health care and telecom were the month’s weakest performers, both down more than 6%. On a year-to-date basis, utilities have led the pack, along with energy and IT, while health care, consumer discretionary, and financial stocks have lagged. Only health care, however, is in the red year to date.

According to the Russell 3000 Growth and Value Indexes, both growth and value stocks lost ground this month, although growth was weaker. Similarly, year to date, value is also outperforming. In fact, it now leads growth by more than five percentage points in 2016.

Outside the U.S., equity markets were mixed for the month, as international developed markets fell and emerging markets continued their upward run.

The MSCI EAFE Index, a widely followed measure of developed market performance, fell 2.05% during October, and is now down 0.35% so far in 2016. British stocks weighed on the index, as investors feared that the better-than-expected GDP advance of 0.5% in the third quarter would reduce the likelihood of further intervention by the Bank of England.

Emerging markets, however, were one of the rare bright spots. The MSCI Emerging Markets Index finished 0.24% higher in October, the best performance of any major index we track, and the only one to finish in positive territory (though just barely). On a year-to-date basis, the index is now up 16.30%. It’s been led by dramatic strength in Latin America, which has rallied for a number of reasons, including political changes in Brazil and strength in oil markets.

Bond markets often take their cues from interest-rate policy—and this month, with signs of greater-than-expected economic growth, those cues may have been worrisome. As a result, the Barclays U.S. Aggregate Index lost 0.76% for the month, its largest decline since June 2015. However, the index is still up 4.99% for the year so far.

Among U.S. Treasuries, the yield on the benchmark 10-year note increased 24 basis points to 1.84%—and is now down 43 basis points year to date. (A basis point is one one-hundredth of a percent.) The yield curve steepened significantly during the month, with big moves taking place at the intermediate to long end. This kind of shift is often associated with a sense among investors that the economy is showing signs of expansion.

While we each may have different views on this year’s election, there’s one thing most of us can probably agree on: It seemed to last forever. Now that it’s over, though, our charge as investors is to look forward. With that in mind, it might be worth spending a few minutes to consider a critical investing topic that may have gotten lost amid the rush of election coverage.

That topic is inflation. For the past few months, a couple of inflation measures (the consumer and producer price indexes) have shown slight upticks—nothing too concerning, but perhaps enough to bring the issue back to the forefront.