Israel says ‘no’ to peace conference in Paris 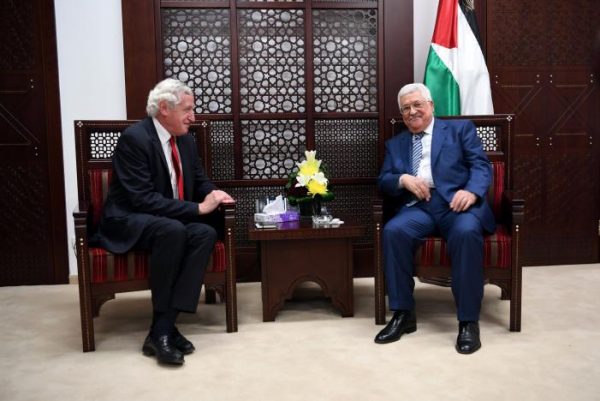 Palestinian President Mahmoud Abbas (R) meets with France’s special envoy for the Middle East peace process, Pierre Vimont, in the West Bank city of Ramallah November 7, 2016. Palestinian President Office (PPO)/Handout via REUTERS
Share:
Israel on Monday reiterated its strong opposition to a French plan to hold international peace talks on the Israeli-Palestinian conflict before the end of the year, saying it preferred “direct negotiations” with the Palestinians.

“It was made clear to the French envoy that Israel will not participate in any international conference convened contrary to its position,” said a statement from the office of Prime Minister Benjamin Netanyahu.

France’s special envoy for the talks, Pierre Vimont, is currently in the region for talks with Israeli and Palestinian officials. Vimont met with Israel’s acting national security adviser Jacob Nagel and diplomatic envoy Yitzhak Molcho in Jerusalem on Monday.

The Israeli officials called for “direct negotiations between Israel and the Palestinian Authority”, adding that “any other initiative only pushes the region further away from this process”, Netanyahu’s statement said.

“Promoting such a conference will make the possibility of advancing the peace process much less likely since it will allow [Palestinian leader Mahmoud Abbas] and the Palestinian Authority to continue avoiding the decision to enter into direct negotiations without preconditions.”

Netanyahu has in the past spoken out against “international diktats” and repeatedly called for direct negotiations.

The Palestinians strongly support France’s international approach, saying years of negotiations with the Israelis have not ended the occupation.

Peace efforts have been at a complete standstill since a US-led initiative collapsed in April 2014.