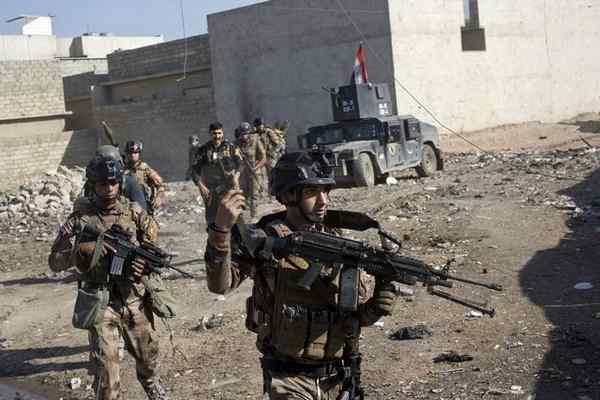 The Iraqi air force provided air cover for the assault Saturday morning, according to Iraq’s Joint Military Command.
Iraqi troops are advancing from three fronts toward Hammam-al-Alil, about 30 kilometers (18.6 miles) south of Mosul, and have reached the College of Agriculture at its edge, a statement said.
On Friday, the UN refugee agency said it had received reports ISIS has been instructing residents of Hammam al-Alil to hand over boys age 9 and older since the Iraqi-led offensive to recapture the country’s second-largest city began October 17.

The boys are apparently being conscripted to fight on behalf of the terror group, Ravina Shamdasani, spokeswoman for the refugee agency, told a press briefing in Geneva, Switzerland.
The long-awaited assault on Hammam al-Alil, the last significant town before Mosul on the Tigris River, will add to the pressure on ISIS fighters.
During a stop on the front lines near Mosul, Iraqi Prime Minister Haider al-Abadi issued a warning to the terror group.
“My message to ISIS: If they want to save their lives, they should lay down their weapons now,” Abadi told reporters, according to state-run Al Iraqiya TV. “We will punish the criminals among them, and we will hold them to account.”
Clashes in eastern Mosul

They said Iraqi troops had taken control of the neighborhoods of At Tahrir in the northeast and Kirkukli and Zuhra in the east. Other residents said that ISIS remained in control of the districts of Qudes and Karama, farther south.
ISIS claimed to have carried out a suicide car bombing early Saturday in the eastern neighborhood of Aden, saying it had killed 15 counterterrorism troops and destroyed six military vehicles.
CNN could not confirm the claim, but witnesses report many civilians leaving the area, heading east away from the city.
An Iraqi security official in Gogjali, on the eastern fringe of Mosul, said two suicide bombers on motorcycles drove toward Iraqi troops Saturday. One was shot and killed; the other escaped.

Hawija civilians killed
Meanwhile, three roadside bombs in two separate locations killed 11 civilians and injured 18 more Saturday as they fled the town of Hawija on foot, security officials in Kirkuk told CNN.
Most of the casualties were women and children.
Hawija is an ISIS-held town about 55 kilometers (34 miles) southwest of Kirkuk.
Thousands of civilians have been forced from their homes as efforts to drive ISIS from Iraq gather pace, with many more expected to follow.
The UN refugee agency said 3,000 people had been received on Friday alone at a new camp for displaced families in Hasansham in Irbil governorate.
They were among an estimated 8,000 people to have arrived at Khazer and Hasansham camps in the past three days, the agency said. Many have come from the eastern outskirts of Mosul in areas Iraqi forces took back in recent days, it said.
“People arrived with nothing or next to nothing, exhausted but relieved to find safety and receive help,” said Frederic Cussigh, senior field coordinator for the UN agency, in Hasansham.

At least 10 local fighters died repelling a coordinated attack by dozens of ISIS militants in the town of Shirqat, Mayor Ali Dodah told CNN on Saturday. Three civilians were also killed, he said.
Twenty-five militants died, but security forces are hunting those who remain, he said. The attack began early Friday.
Iraqi army Capt. Kameran Ismaeil in Shirqat told CNN that about 13 ISIS fighters were still battling local troops in one neighborhood in the town.
Shirqat is about 120 kilometers (75 miles) south of Mosul, well behind the front lines.
It’s the third town ISIS fighters have attacked in an apparent effort to distract coalition forcesfrom the Mosul campaign and tie up their attention and resources elsewhere.
The other surprise assaults were in Kirkuk, about 175 kilometers (109 miles) to Mosul’s southeast, and in Rutba, a town in Anbar province southwest of Mosul that Iraqi forces recaptured in May.

Across the border in northern Syria, ISIS has come under attack from Turkish forces.
The Turkish military hit 71 ISIS targets in northern Syria in the past 24 hours, Turkey’s army said Saturday.
Five ISIS militants were killed and one Turkish officer was killed in clashes, the army said. In addition, five members of the Turkey-backed Free Syrian Army were killed and at least 22 others injured.
An army statement said that the coalition air force had conducted five airstrikes in northern Syria over the past 24 hours, killing eight ISIS militants.
Meanwhile, ISIS claimed responsibility late Friday for a car bombing that killed nine people in Diyarbakir, Turkey, according to a statement circulated online by the ISIS-affiliated Amaq Agency.
The claim contradicted an earlier statement in which Turkish authorities blamed the Kurdistan Workers’ Party, or PKK, for the blast. The attack on a police station in Diyarbakir injured at least 100 people.