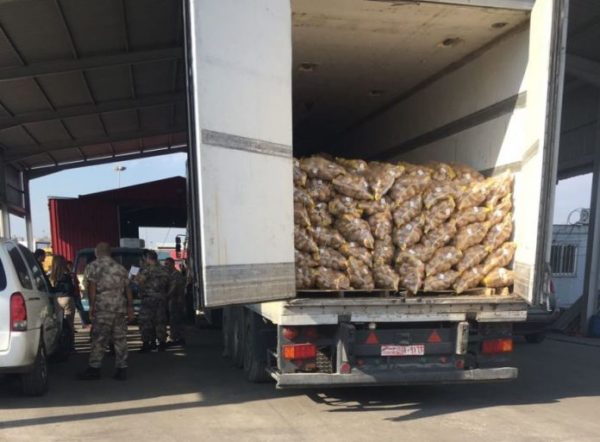 The captagon pills were reportedly en route to the Tripoli port, where they were intended to be shipped to Saudi Arabia.

The Syrian truck driver who identified by the initials F. L. was reportedly transferred to the competent authorities in Tripoli, where he will be interrogated by the security forces.

National News Agency said the truck was carrying potatoes in addition to the caption pills .

Captagon is one of several brand names for the drug compound fenethylline hydrochloride.
Captagon is in the family of drugs known as amphetamines. These drugs are human-made but are chemically related to natural neurotransmitters like dopamine and epinephrine (aka adrenaline). When a person takes Captagon, their metabolism breaks the drug down to amphetamine itself, as well as to theophylline, a molecule that naturally occurs in small amounts in tea and that also has cardiac stimulating activity.

Amphetamine drugs stimulate the central nervous system, increasing alertness, boosting concentration and physical performance, and providing a feeling of well-being. In a BBC Arabic documentary users described the intensity of a Captagon high to filmmakers in no uncertain terms: “I felt like I own the world, high,” one said. “Like I have power nobody has. A really nice feeling.” And another had this to say: “There was no fear anymore after I took Captagon.”

In 1980s the medical community had determined that Captagon’s addictive properties outweighed its clinical benefits. At that point it was banned in most countries. Long-term amphetamine users can suffer from side effects such as extreme depression, sleep deprivation, heart and blood vessel toxicity, and malnutrition, according to the National Criminal Justice Reference Service.

Syria is not the only place where Captagon (real or fake) is being manufactured, nor is it even the biggest market for the stimulant. According to the United Nations Office on Drugs and Crime (UNODC), the three countries reporting the highest Captagon seizures are Saudi Arabia, Jordan, and Syria.

The huge black market for Captagon means big money for Syria- a major producer of the drug.