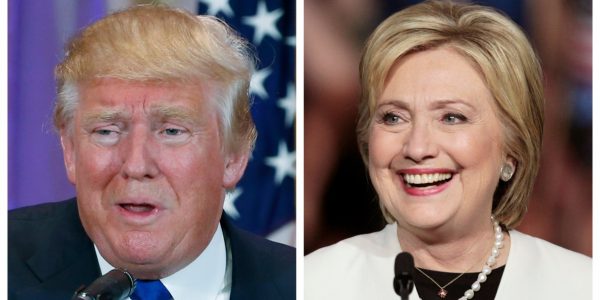 In an apparent move to embarrass the United States over Donald Trump’s claims of a “rigged” presidential election, Russia sought to send monitors to U.S. polling stations for the Nov. 8 vote. 3 states said no
Share:
Russian authorities have asked local US officials if they can observe polling locations in at least three American states on Election Day, but they were rejected amid intense scrutiny of that country’s actions regarding the upcoming elections.

Foreign observers have come to the United States to monitor elections before, so such visits are not rare, but Russia’s requests came as American officials are examining efforts by the Kremlin to interfere with the 2016 race. Earlier this month, the US government formally accused Russia of trying to interfere with the electoral process.

Officials in Texas, Oklahoma and Louisiana all said they received requests from Russian authorities in August. All three states turned down these requests last month.

The states received identically-worded letters from Alexander K. Kazharov, Russia’s consul general in Houston. In these letters, Kazharov asked them to let an officer of the Consulate General of the Russian Federation in Houston “be present (for a short period of time, when convenient)” at a voting station “with the goal of studying the US experience in organisation of voting process” during the presidential election.

Oklahoma and Texas officials rejected the requests, citing state laws, while their counterpart in Louisiana said he would have been open to the request during any other year.

“While it would be our honour to offer the opportunity to observe our voting process, it is prohibited under state law to allow anyone except election officials and voters in or around the area where the voting takes place,” Oklahoma Secretary of State Chris Benge wrote back.

Texas Secretary of State Carlos Cascos responded late last month that Russian observers were not allowed in his state because it is a misdemeanor there for unauthorised people to go inside polling places.

Cascos added that his office could help set up a meeting for Russian representatives to speak with local election officials in Harris County, home to Houston.

Louisiana Secretary of State Tom Schedler also denied the request, though he said he would have been glad to oblige during a different year, something his state has done in the past.

Schedler explained that election officials were still reeling from the impact of the historic flooding that devastated a swath of Louisiana in August. In his letter, Schedler said a third of his employees were affected by the flooding and that his short-staffed office was still working to deal with changing precinct locations stemming from the floods.

“Had this flood event not occurred, we certainly would have been open to such a visit, but I cannot meet such a request with the situation I currently have in front of me,” he wrote. Schedler asked Kazharov to contact him again in 2020 if he is still interested in such a visit.

All of the letters sent by Kazharov are dated September 24, according to copies each state provided to The Washington Post, though officials all say they received the letters in late August.

Repeated reports of Russian attempts to meddle with the election have sparked anxiety about the security of the voting system.

The FBI has warned state officials to watch for intrusions into election systems, and officials said they believed Russians were behind an assault on Arizona’s election system. The Department of Homeland Security has offered state and local election officials help in preventing or responding to Election Day cybersecurity disruptions.

The Russian consulate general in Houston did not respond to a request for comment from The Post on Friday, nor did the Russian Embassy in Washington.

A report published Thursday by Russia Today, a state-owned news agency, quoted a Russian election official who said that “Americans obstruct Russia’s attempts to monitor their elections because they see them as a threat.”

This report said that the requests to send election observers was rebuffed by federal and state authorities. According to Russian officials cited in the story, the United States rejected Russia’s bid to send observers and “even threatened to bring criminal charges against any that appear at ballot stations.”

Donald Trump, the Republican presidential nominee, has come under fire for his stances on Russian cyberattacks. Among other things, he has praised Russian President Vladimir Putin and refused to acknowledge expert consensus that Russia was behind the hacks.

He has also repeatedly claimed without evidence that the upcoming election will be “rigged” and called on his supporters to gather at polling places in “certain areas” to watch for fraud, which voting-rights advocates have worried could lead to voter intimidation.

The State Department said Friday that individual states, not the federal government, can decide whether or not to allow observers.

State Department spokesperson Mark Toner said that Russia could have joined a contingent of election observers sent by the Organisation for Security and Cooperation in Europe (OSCE), which has dispatched groups to US elections since 2002, noting that American officials joined such a group last month to observe the Russian parliamentary elections.

“The fact that they have chosen not to join the OSCE mission makes clear this issue and the story are nothing more than a PR stunt,” Toner said.

The US intelligence community had been looking into what officials called an “ambitious” Russian campaign aimed at the upcoming American election and US influence worldwide.

Donald Trump has repeatedly rejected the suggestion that Russia was involved in the hack, despite being given this assessment during a private intelligence briefing.

His comments on Russia have drawn considerable criticism during the campaign, as in addition to praising Putin, he also suggested that the United States should work with Russians to fight the Islamic State. Trump’s comments on Russia and Putin have been sharply criticised by Hillary Clinton, his Democratic opponent, as well as many Republicans.