Don’t insult gorillas by comparing them to Donald Trump 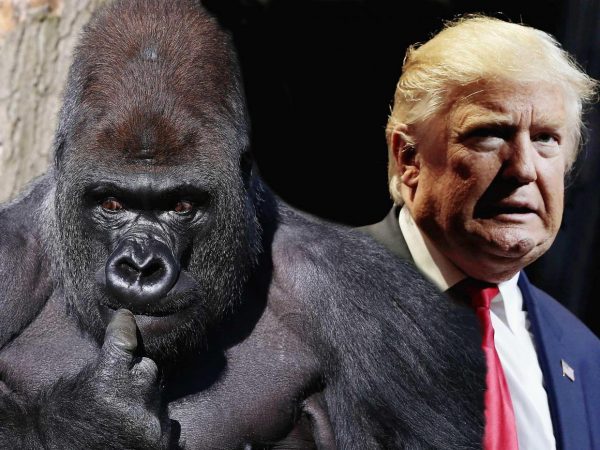 By: Ros Coward
I was already feeling sorry for gorillas before London zoo’s Kumbuka made his unsuccessful bid for freedom. Their incarceration in zoos is bad enough, but this week I had begun to feel affronted on their behalf by the way gorillas are being casually used to justify aggressive human, usually male, behaviour.

On Thursday’s Today programme, Bruno Monteyne, an investment analyst at Sanford C Bernstein, described the standoff between Unilever and Tesco as “two gorillas on behalf of the industry”. Much worse was Nigel Farage’s defence of Donald Trump’s rather menacing performance against Hilary Clinton as being like a “big silverback gorilla prowling the stage”. This was the day after he had excused Trump’s “grab them by the pussy” comment as “alpha-male boasting” and the “kind of thing men do”.

Kumbuka’s escapade at London zoo on Thursday might, on first appearance, appear to justify the use of the silverback gorilla as the ultimate image of an aggressive and dangerous creature mainly preoccupied with asserting dominance. Apparently Kumbuku had a reputation for being “protective” of his family, and on this occasion he rushed aggressively at the glass, banging on it, before escaping into the keeper’s area behind his enclosure.

But a more nuanced understanding of gorilla behaviour doesn’t bear out such projections. Although male gorillas in the wild do exhibit aggressive behaviour and can even kill baby gorillas, more often when they are in groups, which sometimes contain several co-existing males, they are gentle and sociable.

Primatologists like Dian Fossey observed that like any primate, ourselves included, gorillas respond aggressively to stress and threat but are largely peaceable. There are no recorded instances of “alpha-male” behaviour including genital groping or chest thumping displays over the pricing of Marmite. In fact, the whole idea of the “alpha male” in nature – first popularised by Rudolph Schenkel in his study of wolves – has long since been discredited. It does not exist.

This looks like a poster for a 1970s horror movie pic.twitter.com/vCVGrTLdte


To make comparisons between aggressive human males and gorillas is highly problematic. This is anthropomorphism which projects certain human characteristics it wants to “naturalise” on to the animals, in this instance male predatory sexual behaviour or business dominance and aggression. Aiming it at gorillas is not new. “Gorilla” was, and still is occasionally, used in its more 19th-century way, as an insult implying bestial stupidity. Now, however, Farage’s projections are typical. “Gorilla” is used as a shorthand for aggressive, dominant male behaviour as this Wiki entry makes clear: “‘800lb gorilla’ is an American English expression for a person or organisation so powerful that it can act without regard to the rights of others or the law.”

It is the sheer size of mature male gorillas (although the more accurate weight is 400lb, not 800) and the existence of one dominant male in groups which have allowed certain aggressive human males to project their preoccupations on to gorillas.

But our understanding of their behaviour has also been distorted by natural history programmes with their “alpha-male” preoccupations – and even more so by the existence of zoos. In confined enclosures and in small family groups, it’s easy to form an impression of one huge male dominating his little family.

Zoos are also highly stressful environments, making aggression a very real possibility. It’s reported that visitors were banging on the windows of Kumbuka’s enclosure before his escape. When keepers decided to shoot silverback Harambeearlier this year at Cincinnati zoo, visitors were screaming and shouting at him as he stood over the boy who had climbed into his pen. There are different opinions on whether the gorilla would have harmed the boy, but aggression is certainly a well-documented response to fear and stress.

In the wild, male dominance is much less striking to primatologists; instead they witness complex, nuanced behaviour where interaction between mothers, and attention to the young is just as important for group cohesion. Howletts Wild Animal Park in Kent has larger enclosures and bigger groups of animals. It’s still captivity but it permits a glimpse of wild gorilla behaviour where maternal attentiveness and group cooperation is just as defining of a gorilla’s essential nature as the dominance behaviour of some males.

There are, in short, just as strong grounds to call someone a gorilla if she’s an attentive mother. But that wouldn’t suit the likes of Farage, who seek not just to naturalise but to excuse certain types of human behaviour, making it seem as if treating women with contempt is something eternal and unchangeable. Maybe we should laugh it off. Except gorillas need all the help they can get at the moment and being associated with some of the least endearing examples of the human male is not good for their image.
Ros Coward is a professor of journalism at Roehampton University. She has worked for many years as a freelance journalist, contributing to several national newspapers and magazines