OPEC to Trump adviser: No Chance

Back in 1999, he led a group of independent U.S. oil producers calling on the government to impose duties of as much as 240 percent on crude oil imports from a number of OPEC countries, and Mexico too, for good measure. He claimed the producers were selling their oil in the U.S. at unfairly low prices: WTI crude oil had fallen to as little as $10.35 a barrel in December 1998.

A little more than a month ago, Hamm told Bloomberg Businessweek that the downturn in oil prices over the past two years — which saw WTI fall to a low of $26.05 a barrel — had made OPEC “irrelevant.”

Victory at last? Well, maybe not. Just last week, in an interview with the Financial Times, he called on the now irrelevant OPEC, and Russia, to ride to the rescue of the U.S. shale oil industry, saying it was “high-time” for them to agree on a freeze in production in an effort to raise prices.

Hamm’s call is unlikely to be heeded.

OPEC members are undoubtedly being hurt by the dramatic fall in the price of oil that began in the middle of 2014 and has lasted much longer than almost anyone anticipated.

Venezuela is teetering on the brink of economic and social collapse. Libya has fragmented into a group of city-states with feuding militias. Sabotage has soared again in the swamps of Nigeria’s oil-producing heartland. Saudi Arabia is dealing with conflicts on both its southern and northern borders, with regional rival Iran supporting the opposing side in both cases.

While all of these tribulations have causes that go beyond the fall in oil prices, they are all aggravated by the drop in revenue that the oil price collapse has caused. With their incomes squeezed, governments have less money to head off social unrest.

So why wouldn’t OPEC and Russia come together to freeze production? Surely it is in all their best interests.

That may be true in the short term. In the long term, that’s far from clear — at least for big, low-cost producers in OPEC who have traditionally borne the brunt of the group’s supply management.

The refusal by Saudi Arabia in November 2014 to continue in the role of the world’s swing producer wasn’t a knee-jerk reaction to the slide in oil prices that had begun some five months earlier. It was a wholesale reassessment of how the oil market should work: No longer would the producers of cheap crude limit their supply in order to artificially raise the price. Here’s what erstwhile Saudi Oil Minister Ali Al-Naimi said in March 2015:

“It is not the role of Saudi Arabia, or certain other OPEC nations, to subsidize higher-cost producers by ceding market share.”

No matter how often the prospect of an output freeze is raised, that fundamental change in Saudi Arabia’s view of its role in the world of oil remains. The kingdom’s apparent willingness to contemplate a freeze is always couched in terms of an agreement involving “all producers.”

Saudi Arabia isn’t alone in its position. Speaking at an industry conference in Singapore last week, Mohsen Ghamsari, director for international affairs at the National Iranian Oil Company said that oil production should shift to low-cost areas like the Persian Gulf. Iran, like Saudi Arabia, is unwilling to contemplate an output freeze.

As long as these two arch-rivals agree on the supremacy of low-cost oil producers, there can be little incentive for them to throw a lifeline to their higher-cost rivals.

And what of Russia? Although Energy Minister Alexander Novak says his country is ready for an oil freeze, he has also said that it is up to OPEC members to agree among themselves first and then present a proposal to Moscow. Meanwhile, Russia’s oil production jumped above 11 million barrels a day in the first week of September.

Whatever you hear in the next couple of weeks, don’t expect the informal gathering in Algeria on Sept. 27 to deliver an output freeze that will impose any real restriction on the volume of oil reaching the market from OPEC members — or anybody else. 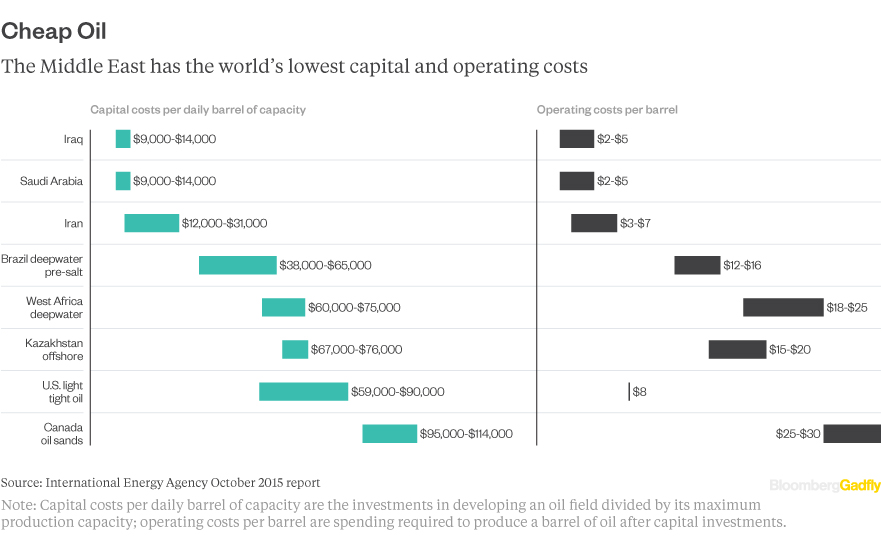