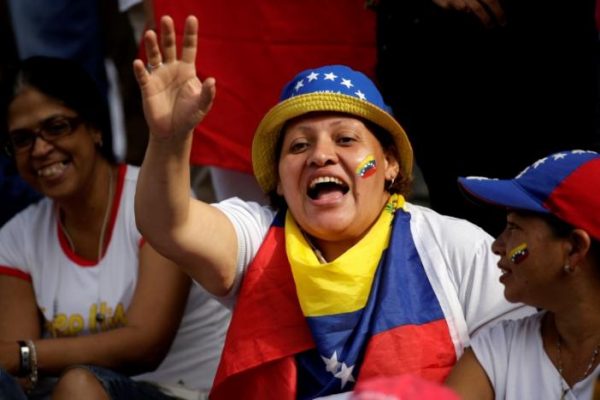 An opposition supporter shouts slogans during a rally to demand a referendum to remove Venezuela’s President Nicolas Maduro in Caracas, Venezuela, Venezuela September 1, 2016. REUTERS/Marco Bello
Share:
Dressed in white and chanting “this government will fall,” opposition supporters flooded Venezuela’s capital on Thursday to press for a recall referendum this year against unpopular Socialist President Nicolas Maduro.

With protesters in from the Amazon jungle to the western Andes, the opposition coalition was aiming for at least one million people at rallies across the capital to show anger at Maduro and Venezuela’s deep economic crisis.

“We are going to bring down Maduro!” said Naty Gutierrez, 53, whose 75-mile (120 km) drive from Maracay into Caracas took three times longer than usual due to soldiers’ roadblocks.

“We are going to defeat hunger, crime, inflation and corruption. They’ve done nothing in 17 years. Their time is finished,” she added, surrounded by thousands of people clad in white and waving national flags at one gathering point.

In power since Hugo Chavez’s presidency from 1999, the ruling socialists have hit a low ebb as falling oil prices and the failing state-led economy have left the OPEC nation in turmoil.

Triple-digit inflation, a third year of recession, shortages of basics, and long lines at shops have exasperated many of Venezuela’s 30 million people. The frustration was expressed in a resounding opposition election win in a December legislative vote.

Maduro, 53, says the opposition-dubbed “Takeover of Caracas” on Thursday is a front for violence, akin to a short-lived 2002 coup against his mentor Chavez, who died of cancer three years ago. Maduro has failed to replicate his charismatic predecessor’s popular appeal, and his ratings in opinion polls have halved to just over 20 percent.

“I’m ready for everything … we will not allow a coup,” Maduro told supporters late on Wednesday. He said various people were detained planning to place explosives and kill fellow opposition supporters to discredit the government and sow chaos.

He did not give details, but rights groups and opposition parties said that authorities had arrested some well-known activists in the run-up to the protests. They said more than a dozen opposition campaigners and supporters were in custody.

Extra police and troops were positioned around Caracas, and there were roadblocks on most major routes, with buses being blocked and traffic crawling. Security forces fired teargas on one highway where buses were stopped but people tried to continue on foot, pro-opposition broadcaster VivoPlay said.

“All they are interested in is staying in power,” said construction worker Luis Palacios, 59, from the poor Caracas neighborhood of Petare. “We want change, we are hungry.”

Dozens of indigenous people marched hundreds of miles from their home state of Amazonas.

Fearing violence, especially given 43 deaths around anti-Maduro protests in 2014, many businesses in the capital closed.

Despite the country’s ills, the opposition has struggled to consolidate support among Chavistas and even its own base.

With a compliant Supreme Court vetoing every major measure that the opposition-controlled congress passes, the opposition wants to activate a plebiscite on Maduro as allowed in the constitution halfway through his term.

But the election board has dragged its feet on the process, making the vote unlikely this year. If such a vote took place in 2017 and Maduro lost, his vice president would take over, keeping the ruling Socialist Party in power, rather than there being a new presidential election.