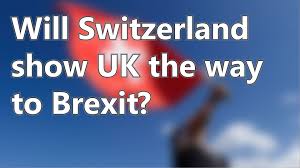 British politicians are now poring over ways to extricate Britain from the EU, following June’s vote to leave.

One of the key problems they hope to solve is how to protect UK access to Europe’s markets, while controlling immigration from the EU.

Many in Britain wonder if non-EU member Switzerland could show the way. Switzerland has access to Europe’s single market, its economy is booming, unemployment is low. The country, at first sight, thrives outside the EU.

But first appearances can be deceptive. In one very crucial area, immigration, the Swiss find themselves in a very tricky position.

It is all to do with a landmark referendum held in February 2014, when the Swiss voted – very narrowly – in favour of quotas on immigration from the EU.

That sounds a perfectly reasonable thing to do: Switzerland is not in the EU and should, it might be assumed, be able to control its borders, and the numbers of people arriving to work.

But it is not that simple. Over more than a decade the Swiss, whose economy depends on trade with Europe, have negotiated a series of bilateral, but interdependent, agreements with Brussels.

Access to the EU’s single market hinges on Switzerland’s participation in free movement of people.

And so, two-and-a-half years after the vote for quotas, nothing has changed. Free movement is still in place in Switzerland.

Despite ever more desperate efforts by Swiss diplomats to negotiate a deal with the EU that would honour voters’ wishes, the silence from Brussels has been deafening.

“The EU has one red line, and that is quotas,” explained Cenni Najy of the Swiss political think-tank Foraus.

“They will never accept quotas, because that would mean really the end of free movement.”

“I think Switzerland will have to wait many months, maybe even many years,” he said.

“Now the number one preoccupation of the European Commission is to find a settlement for the UK, and not to allow Switzerland to free ride or to have very specific tailor-made agreements.”

But Switzerland cannot afford the delay. The government is in a race against time to prepare legislation to limit EU immigration, before a March 2017 deadline demanded under the Swiss constitution.

The conundrum is: how to introduce the quotas that voters say they want, while preserving that crucial access to Europe’s single market.

Swiss diplomats were privately relieved the meeting involved a quick coffee and not just a handshake in a corridor, but it did not yield the deal the Swiss had hoped for.

Later Mr Schneider-Ammann, in an interview with Swiss television, bluntly highlighted the problem.

“We’ve got to find a way to keep free movement of people, and to respect the will of the voters to reduce immigration… we’re trying to square a circle.”

Swiss business leaders, increasingly uncertain about how long they will be able to recruit from Europe, or how long their access to the single market will last, are worried.

“It doesn’t help investors in Switzerland as long as this big question is not settled with the European Union,” pointed out Jan Atteslander of the Swiss Business Federation.

The federation has been working on compromise proposals: not exactly quotas, but a mechanism under which employers would be required to give preference to workers already living in Switzerland, if, in certain professions, unemployment was high.

“It’s a safeguard clause,” Mr Atteslander explained. “That in some areas, where you see too high immigration, you can slow it down temporarily, and then after a quarter or half a year you can look again.”

It is believed the UK government may also be looking at such options.

The problem, many analysts believe, is that a deal designed to please everyone, both Brussels and Swiss voters, may actually please no one.

It is unlikely that Mr Atteslander’s modest temporary suggestion – which, given Switzerland’s strong economy and need for skilled workers, is unlikely even to be triggered in the foreseeable future – will please the powerful right-wing Swiss People’s Party (SVP). It campaigned hard for proper quotas on immigration, and its leaders insist that the will of Swiss voters must be honoured in full.

Meanwhile from Brussels’ point of view, a safeguard clause which appears to discriminate against EU citizens in favour of the Swiss could still be viewed as a violation of free movement.

And so another solution is emerging, which may sound rather familiar to Brexit Britain.

Among young Swiss, a majority of whom voted against immigration quotas, there is a movement to hold the vote all over again. The necessary 100,000 signatures have been gathered, and campaigner Sean Serafin believes a new vote will be more informed than the last one.

“When voting on quotas the Swiss had a system they knew well, which was freedom of movement, and a theoretical system, quotas, which was not very clear,” he explained.

“So I think they decided to vote for some sort of control over immigration, without knowing what it meant.”

Mr Serafin is confident that, now that voters know how hard it is to “square the circle” with Brussels, they may change their minds, and back free movement of people.

But a new referendum cannot be held before that March deadline, and the Swiss now hope a visit to Zurich, planned for September by Jean-Claude Juncker, might bring a deal. Political analyst Cenni Najy is sceptical.

“Within the internal market there are four freedoms, and you cannot disassociate them,” he says.

“If you want access to the internal market, you have to accept free movement of persons. They [the EU] have said it to Switzerland and I think they are going to say it also to the UK.”

Some of Britain’s most Eurosceptic politicians have suggested leaving the single market would be a survivable move. But UK business leaders, like the Swiss, are becoming anxious.

So while Britain agonises over its EU exit strategy, in Switzerland the waiting game continues.

Perhaps that deafening EU silence over Swiss attempts to change free movement is directed not just at the little alpine country, but at the big island nation across the Channel too.