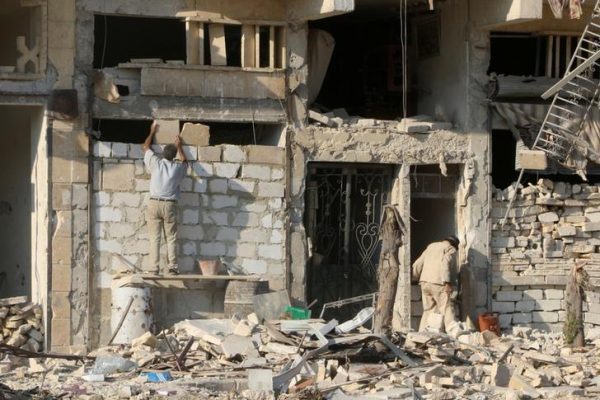 A man rebuilds a wall of a damaged building in the rebel held al-Katerji district in Aleppo, Syria August 13, 2016. REUTERS/Abdalrhman Ismail
Share:

Heavy fighting took place in different sectors of the Syrian city of Aleppo on Sunday as rebels assaulted two government strongholds in the city’s northwest and south, a monitor of the war said.

Fighting for control of Aleppo, split between its government-held west and rebel-held eastern neighborhoods, has intensified in recent weeks causing hundreds of deaths and depriving many civilians of power, water and vital supplies.

Insurgents including Islamist militant groups detonated car bombs before launching an attack on the Jamiat al-Zahraa district, an army base and residential district, the British-based Syrian Observatory for Human Rights said.

Rebel groups then attacked the army’s positions in a cement factory on the city’s southwest, adjacent to the mouth of a corridor into opposition-held east Aleppo that insurgents had opened up a week ago, breaking a government siege.

Earlier in the day, the Syrian army and its allies captured some buildings in the southwestern 1070 housing development, also located near the entrance to the rebel corridor into Aleppo.

Aleppo is one of the bastions of the rebellion to oust Syrian President Bashar al-Assad, whose army is backed on the ground by Shi’ite Muslim militias from neighboring countries and from the skies by Russian air strikes.

Some recent gains by the insurgents have been made by Jabhat Fateh al-Sham, previously known as the Nusra Front, which described itself as an affiliate of al Qaeda until it cut ties with the militant movement and renamed itself late last month.