2 Dead, Over 1,000 Rescued in Louisiana Flooding, as Heavy Rains Continue 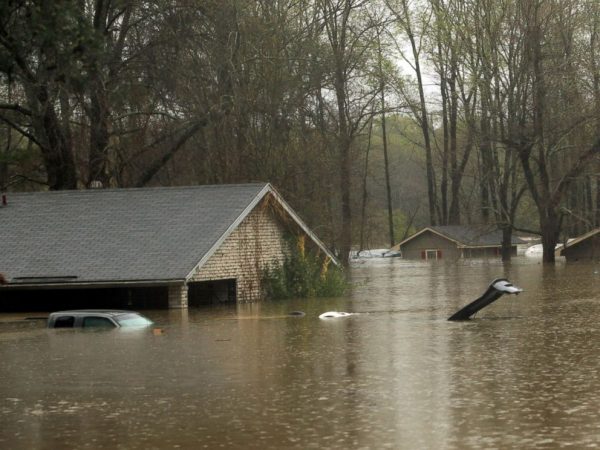 National Guard soldiers and officials in boats and helicopters have plucked more than 1,000 people from their homes and cars as “unprecedented, historic” flooding has swamped Louisiana, the state’s governor said on Saturday.

At least two people have been killed as swift-moving water quickly inundated roads and searches were ongoing for missing people.

“This is an ongoing event. We’re still in response mode,” Gov. Edwards said, urging residents to heed warnings to evacuate and not to rely on their past experiences because the state hasn’t seen flooding like this before.

Beginning Friday, six to 10 inches of rain has fallen on parts of Louisiana, and an additional four to 6 inches was possible on Saturday afternoon, National Weather forecaster Donald Jones said.

Mississippi and Alabama were also struggling with heavy rainfall.

In Baker, just north of Baton Rouge, residents said they had to be rescued by boats or wade though waist-deep, snake-infested water to reach dry ground. Dozens of them spent Friday night on cots at a makeshift Red Cross shelter only a few blocks from their flooded homes and cars.

Gov. Edwards had declared a state of emergency on Friday. The flooding even forced Mr. Edwards and his family out of the Governor’s Mansion, where chest-high water had filled the basement and electricity to the building had to be cut off. “That’s never happened before,” he said.

The governor and his family have been relocated to a state police facility in the Baton Rouge area. His home in the hard-hit area of Tangipahoa Parish hasn’t taken any water.

Meanwhile, one man died on Friday after slipping into a flooded ditch near the city of Zachary, said East Baton Rouge Parish Sheriff’s spokesman Casey Rayborn Hicks. A second victim was found in St. Helena Parish, where crews pulled his body from a submerged pickup on Louisiana Highway 10, authorities said.

State Sen. Bodi White, who represents some of the hardest-hit areas in the suburbs around Baton Rouge, said water has reached levels that were never recorded during 1983’s record flood. “This is going to be water we’ve never seen,” he said on Saturday. “They were getting people off roofs in St. Helena Parish.”

Numerous rivers in southeast Louisiana and southern Mississippi were overflowing. The governor said some were expected to crest more than 4 feet above previous records, and officials weren’t sure how widespread the damage would be.

In a 24-hour period, Baton Rouge reported as much as 11.34 inches of rain compared with 2.34 inches at New Orleans’ international airport in Kenner. A weather service meteorologist said one weather observer reported 17.09 inches of rainfall in Livingston.

The Comite River near Baton Rouge and Amite River near Denham Springs, both in Louisiana, were forecast to set record crests over the weekend. The Tickfaw River, just south of the Mississippi state line in Liverpool, Louisiana, was already at its highest recorded level.

In Crosby, Mississippi, more than 50 people flooded out of a neighborhood will be housed at a shelter in Natchez. Wilkinson County Chancery Clerk Thomas Tolliver said an apartment complex and surrounding houses in the town were flooded after 10 inches of rain fell. Authorities said they expect to shelter displaced Crosby residents at least until Monday.