Al-Nusra rebranding: New name, same aim? What is it all about? 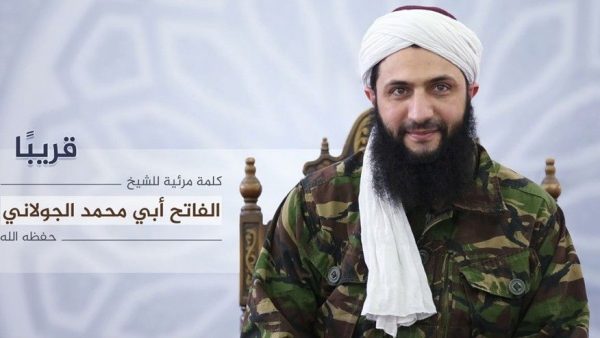 An undated photo of Nusra Front leader Mohammed al-Golani announced in a video message that the militant group is changing its name, and claims it will have no more ties with Al Qaeda. (AP)
Share:

Jabhat al-Nusra, one of the biggest jihadist groups in Syria, has cut its ties with al Qaeda, and changed its name.

The organization claims the move is meant to foster unification among rebel factions but the US and others say it just a PR exercise. does the announcement signal big news for the troubled country?

Jabhat al-Nusra, one of the biggest jihadist groups in Syria, has cut its ties with al Qaeda, and changed its name to Jabhat Fateh Al-Sham (the Front for the Conquest of the Levant).

Mostafa Mahamed, one of the group’s leaders, says that prior to the split al-Nusra “was an official branch of al Qaeda. We reported to their central command and we worked within their framework, we adhered to their policies.
“With the formation of JFS, or Jabhat Fateh Al-Sham, we are completely independent. That means we don’t report to anyone, we don’t receive our directives from any external entity.”

Syria expert Charles Lister, a senior fellow at the Middle East Institute, says the move “has not come entirely out of the blue” — elements within Jabhat al-Nusra have been arguing in favour of a split since 2013.

Lister says about a third of the group threatened to splinter off earlier this year: “That, and the potential threat of U.S. and Russian airstrikes put pressure on the group’s senior leadership,” to make the change.
Why did the group split from al Qaeda?

“Al Qaeda as an international organization has been changing,” says Lister. “It is becoming more of an idea than an organization. It is looking to decentralize jihad, to give more autonomy to individual affiliates with the aim of making jihadi rule more likely.

“Jabhat al-Nusra has demonstrated the value of that,” he says, distancing itself from some of the more bloodthirsty Islamist groups. “It has an explicit ban on tough punishments: It doesn’t chop hand off for thievery, it doesn’t execute for murder.”

Such a stance has been aimed at securing popular acceptance for the group, Lister says, adding that their next goal is to make it more of a mass movement within Syria.

The split and efforts to rebrand are a key part of widening al-Nusra’s appeal in the country, where al Qaeda’s international focus is viewed with suspicion by other Syrian rebel groups, he says.

Mahamed says the new organization will focus solely on Syria: “If dissolving external organizational affiliations or ties will remove the obstacles that are in the way of unity, then this must be done.

“When we were part of al Qaeda, and as our five year track record shows, our core policy was to focus all of our efforts on the Syrian issue. That was our policy before and it will be our policy today and tomorrow.”

What does JFS want?

Lister says nobody should be under any illusions as to the newly-named group’s ambitions: “Their long term aim is to establish an Islamic emirate in Syria.”

“The belief that Islam should govern the affairs of the Muslims isn’t exclusive to any group,” says Mahamed. “This is the core belief… What you have to understand is that Muslims, when given the opportunity, when given the freedom, they will always choose to be governed by their faith. It’s that simple.

This idea of imposing a Western liberal democracy on a Muslim nation, this stems from an arrogant imperialistic mentality,” he adds.

For now, Lister says “Syrians across the spectrum reject [the idea of an Islamic emirate] as too extremist,” he says, but in future it might be deemed acceptable by the country’s Islamists — if it is Syrian-only, and not part of a wider international entity.

What difference will the split make?

Mahamed says the move is “part of a long road map towards unifying all the groups on the ground,” for which “negotiations over unity have been ongoing for several years.”

Just how many of Syria’s myriad rebel groups will be willing to align themselves with the new-look Jabhat Fateh Al-Sham is still unclear.

But Lister says that since the name change, “of the six other jihadist groups in Syria tacitly supporting al Qaeda, all of them have come out in favour of JFS [and are] considering some kind of unity proposal.”

Over time, he says, JFS is likely to swallow up more and more of the country’s mainstream Islamist groups.
“The Syrian people have been constantly demanding the groups on the ground to get together, to merge,” says Mahamed.
“A true unification amongst groups will be a huge game changer here in Syria. When we stand in solidarity, al-Assad has no chance against us.”

What will it mean internationally?

Director of National Intelligence James Clapper called it a “PR move … to create the image of being more moderate,” while State Department spokesman John Kirby said the U.S. would “judge a group by what they do, not by what they call themselves,”
Lister says the U.S.’s designation of the group as a foreign terrorist organization is unlikely to change, but he says al-Nusra’s shift “puts the U.S. and Russia in a tricky situation,” since they had planned joint operations against the militants.

If the new JFS does link up with other rebel groups, any international action against its fighters may be seen as counter-revolutionary — effectively supporting the Assad regime.

Lister believes that the split from al Qaeda could make it harder for the international community to argue against foreign countries such as Turkey and Qatar doing more to arm and fund the rebels.

“This has really put a spanner in the works on an international level,” he says.