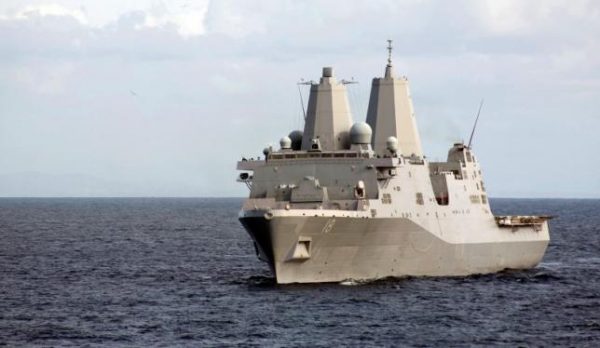 An amphibious vessel, the USS New Orleans, is seen in this photograph taken in the Pacific Ocean, on November 4, 2008 and released to Reuters March 20, 2009. REUTERS/J.G. Jared Apollo Burgamy/U.S. Navy/Handout
Share:

Iran’s elite Revolutionary Guard Corps on Monday dispatched five military vessels to monitor a U.S. warship hosting one of America’s top generals on a day trip through the Strait of Hormuz, coming as close as 500 yards (meters).

For Army General Joseph Votel, who oversees all American military forces in the Middle East, the approaches were a safe though worrying reminder of how little time American forces have to decide whether IRGC ships might pose a threat.

“As you’ve seen in a relatively compressed space here, there is great opportunity for miscalculations,” Votel, head of the U.S. military’s Central Command, told reporters on the bridge of the USS New Orleans, an amphibious dock ship with about 650 Marines aboard.

It was also the latest sign that the IRGC appears to be sticking to a familiar posture in the Gulf that predates last year’s nuclear accord between Iran and six world powers including the United States.

One of the four speedboats that approached the New Orleans and its escort, a Navy guided missile destroyer, the USS Stout, cut its engines and watched as the U.S. warships passed. An hour before, a larger Iranian guided-missile patrol craft came by.

U.S. officials stressed that such approaches fell within the category of professional interactions, the kind they see during 90 percent of the U.S. Navy’s roughly 250 transits through the Strait of Hormuz each year. But the Navy says some 10 percent are classified as unsafe, abnormal or unprofessional.

“We don’t always have a lot of time to deal with those interactions. I think what we’ve probably learned here today is that it’s measured in minutes,” Votel said.

For its part, Iran sees the Gulf as its backyard and believes it has a legitimate interest in expanding its influence there. It has long argued that the region should organize its own security collectively, without outside powers. Accordingly Iran uses its sea power in the Gulf to show it will not be cowed by Washington’s naval presence, analysts say.

But in 2008 and 2010, in moves that prompted critics to accuse Iran of destabilizing the region, the Islamic Republic threatened to disrupt oil shipping in the Gulf by shutting the Strait of Hormuz if there were any attack on its nuclear sites.

The U.S. military’s concerns about Iran’s behavior in places like the Strait, one of the world’s most important oil shipping channels, have persisted despite the accord under which Tehran curbed its disputed atomic program in exchange for relief from economic sanctions.

“That (the nuclear deal) certainly has addressed one very important threat … but their other activity out here has not changed,” Votel said.

A U.S. Navy report also said the Iranians replaced an American flag on board with an IRGC one, ransacked the vessels, and damaged equipment. The Navy also admonished U.S. sailors for straying into Iranian waters.

Karim Sadjadpour, an Iran analyst at the Carnegie Endowment for International Peace, said there were no signs of a change in the Revolutionary Guards’ culture of viewing the United States as an inherent threat.

“Ayatollah Khamenei, the commander in chief of the IRGC, regularly praises Iranian officials who defy the U.S. and scorns officials who advocate cooperation with the U.S.,” Sadjadpour said. “I haven’t seen any signs that this institutional culture has changed after the nuclear deal.”

Votel said Iran needed to be held accountable for its behavior and scorned its treatment of the U.S. sailors.

The U.S. Navy says it has given assistance to 11 Iranian-flagged vessels in distress in the Gulf since 2012. “If we came across a ship, a small vessel in the area, we would try to assist it,” Votel said.