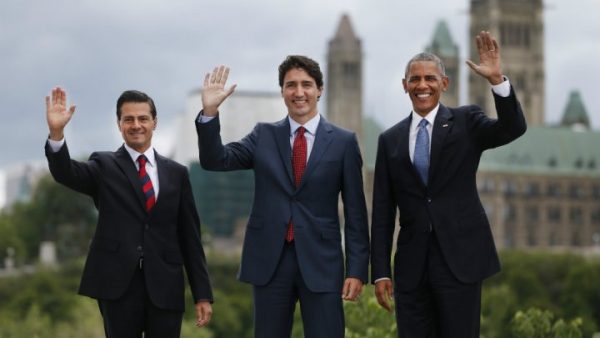 “The integration of national economies into a global economy: that’s here, that’s done,” Obama told a news conference at the end of a summit dubbed the “Three Amigos”.

“And us trying to abandon the field and pull up the drawbridge around us is going to be bad for us,” he said after the talks, hosted by Canadian Prime Minister Justin Trudeau.

Trump says free trade has been disastrous, costing thousands of US jobs and depressing wages.

Similar complaints were heard in Britain ahead of a surprise referendum vote last week to leave the European Union and its free trade area.

Obama and Pena Nieto stressed the importance of the relationship between their countries, which has come under strain amid heated US campaign rhetoric.

Later, at the news conference, Pena Nieto warned of the dangers of populism in a globalized world and defended comments earlier this year in which likened Trump to Adolf Hitler and Benito Mussolini.

“Hitler, Mussolini, we all know the result,” he said when asked to explain the comparison. “It was only a call for reflection and for recognition, so that we bear in mind what we have achieved and the great deal still to achieve.”

The summit, Trudeau’s first and Obama’s last, could be the final harmonious one between the three countries if Trump wins the White House in the November US presidential election.

Trudeau, who has generally steered clear of commenting on Trump’s remarks since taking power last November, said that regardless of rhetoric the three nations would continue to have tremendously close relations.

Obama has strongly criticized Trump in recent weeks and took aim at the Republican’s promises to clamp down on what he says is out-of-control illegal immigration.