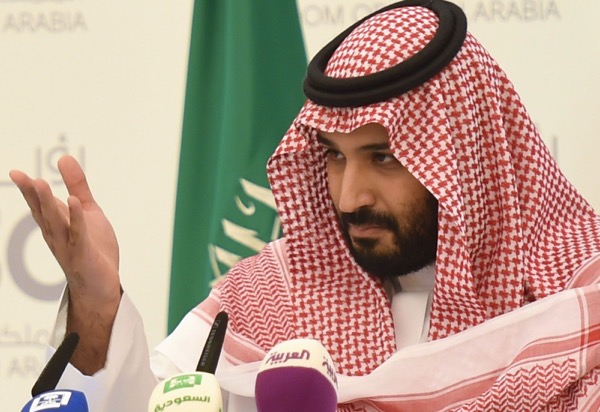 The entertainment events aimed at creating more jobs were allowed by Deputy Crown Prince Mohammed bin Salman, head of the royal court, defense minister and son of King Salman, as a matter of economic survival as well as entertainment for Saudi citizens, dependent for decades on welfare state benefits.
Share:

Saudi Arabia’s Deputy Crown Prince Mohammed Bin Salman is making his solo Washington debut this week, pitching an economic plan to investors and trying to counter negative views among U.S. lawmakers that his country isn’t stopping terrorist financing. Just don’t expect to see much of him.

While Prince Mohammed, who is also the Saudi defense minister, has been whisked to meetings across Washington since Monday, all of them have been closed to the press. He broke the Ramadan fast with Secretary of State John Kerry, met intelligence and congressional leaders including House Speaker Paul Ryan and made plans to visit Defense Secretary Ash Carter at the Pentagon, all without making any public comments.

Details of what’s been discussed behind closed doors are sparse, but participants said the kingdom’s economic overhaul, regional rival Iran, the wars in Yemen and Syria and the fight against Islamic State were all on the agenda.

“He clearly expressed in detail a vision for the Saudi economic strategy, security strategy, and the reason why he sees the relationship with the United States important for the country,” Democratic Senator Ben Cardin said Tuesday after meeting the 30-year-old prince. “He’s very impressive.”

The visit comes at a sensitive time in a U.S.-Saudi relationship that President Barack Obama described as “complicated” in an interview published in March by The Atlantic magazine. The prince arrived two days after the killing of 49 people at an Orlando dance club by an American who proclaimed support for Islamic terrorist groups and had traveled twice to Saudi Arabia. And it takes place amid continuing demands that declassified portions of a Sept. 11 report be made public and criticism among political leaders that the kingdom doesn’t do enough to stop extremism.

“These are issues that Saudi Arabia needs to comes to grips with in terms of what it means to the relationship with the U.S.,” said Stephen Seche, executive vice president of the Arab Gulf States Institute in Washington and a former ambassador to Yemen.

Even if the prince is keeping a lower profile, the visit is still a signal event for both countries. Under Saudi King Salman Bin Abdulaziz, Prince Mohammed, his son, is leading Saudi Arabia’s biggest-ever economic shakeup, moving to cut subsidies and diversify the economy away from oil by generating an extra $100 billion in non-oil revenue by 2020.

“U.S.-Saudi relations are much better than often portrayed,” said Bruce Riedel, a senior fellow at the Brookings Institution who spent 30 years at the Central Intelligence Agency and served on the National Security Council. “The Obama administration has sold the kingdom over $110 billion in arms in seven years. The president has traveled to Saudi Arabia more than any other country in the Middle East. So we should not let honest differences of opinion obscure the strength of the partnership.”

That idea was echoed by Republican Senator Lindsey Graham of South Carolina, who called the Saudis “an important ally. They’re not perfect, nor are we. But I think the deputy crown prince represents a bright future, and we just need to keep the alliance.”

The meeting blitz with lawmakers also could help undercut support for Senate-passed legislation that would let victims and their families sue other countries over alleged involvement in the Sept. 11, 2001 attacks. Fifteen of the 19 men involved in the attacks were Saudi nationals, and the legislation is widely seen as targeting the Middle East kingdom.

Saudi Arabia will be counting on U.S. investors to help support its efforts to diversify and accelerate growth in its $750 billion economy. The prince is scheduled to visit the U.S. Chamber of Commerce headquarters on Thursday and then meet with executives of defense companies on Friday.

“No one is saying, ‘buy me a first-class ticket”’ to Riyadh, but “there’s a lot to be learned about what Saudi Arabia is proposing,” said Seche. For the Saudis, “this is a watershed moment and they would like to see the U.S. respond,” he added.

The visit isn’t totally under-the-radar. That’s impossible when an 11-car motorcade festooned with the green Saudi flag is taking the prince around the U.S. capital. And he stood out easily on his way to meet lawmakers, wearing the traditional dishdasha robe amid throngs of tourists and his entourage in the Capitol building.

Yet while Hillary Clinton said in a stump speech this week that it’s time for “the Saudis, the Qataris and the Kuwaitis and others to stop their citizens from funding extremist organizations,” the U.S. political campaign wasn’t a central issue in the meetings, at least according to its American participants.

The name of Republican front-runner Donald Trump, who has proposed a ban on Muslims entering the U.S., didn’t come up, said House Homeland Security Committee Chairman Michael McCaul, a Republican from Texas. “Not at all,” seconded House Democratic Leader Nancy Pelosi.

“We talked about greater coordination on not only coalition forces and military efforts against ISIS but also countering from an ideology standpoint, how to counter violent extremism and the spread of that ideology,” McCaul added.

The prince may meet with Obama on Friday, but no such White House meeting has been announced and don’t expect a news conference in the Rose Garden. Such a meeting, like the others, would be closed to the press.