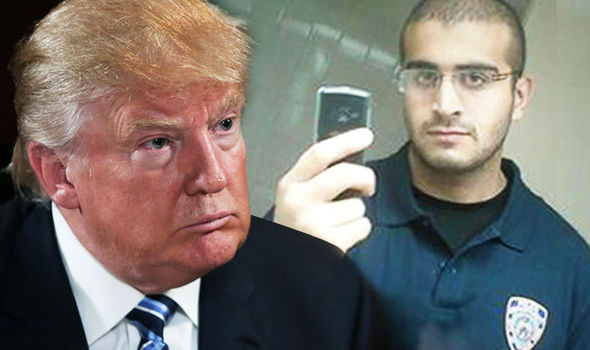 Hate has the stage, the mic and most of the cards.

That’s the problem, the common thread, the biggest glaring issue in all the bloodshed, grief and debate over the deadliest mass shooting in American history.

Omar Mateen despised gays in the same way that Donald Trump and too many of his supporters despise Muslims. And hate, alas, is contagious.

It’s true that Mateen, 29, pledged his allegiance to the brutal Islamic State organization before he slaughtered 49 people and injured 53 others inside a gay nightclub in Orlando early Sunday morning. But it isn’t Islam that explains what Mateen did.

There are 1.6 billion Muslims in the world — 3.3 million in the United States — and the vast majority are peaceful, productive people. If mainstream Islam really demanded violence, our world would look pretty different.

“What is clear is that he was a person filled with hatred,” President Obama said Sunday. “In the coming days, we’ll uncover why and how this happened, and we will go wherever the facts lead us.”

Obama knows what it’s like to be the target of hatred. He and first lady Michelle Obama have endured endless abuse during their seven years in the White House.

This week, the president’s enemies, led by Trump, excoriated him for avoiding the use of the word “Muslim” in his speech. They said nothing about the 49 souls who were lost, the pain of their family members and friends, the damage to our nation’s sense of security.

So where was their fury when Obama omitted the word “Christian” in the speech he gave after Robert Lewis Dear Jr.’s slaughter at a Planned Parenthood clinic in Colorado? Dear had crosses all over his ramshackle house and his Internet writings urged people to “Turn to JESUS or burn in hell.”

Islam made Mateen a killer the same way Christianity made Dear a killer. The one and only altar those men worshiped at was the altar of hate.

Our country is being consumed by all this rage, and sometimes it feels impossible to put a stop to it.

“Hate cannot drive out hate, only love can do that,” the Rev. Martin Luther King Jr. once said before he became the victim of a hater.

Muslims were already under attack from Trump, who wants to bar them from entering the United States. He repeated that call again Monday, using Mateen’s deadly attack on gays to justify his own ugly bigotry toward Muslims.

“This horrific Orlando attack however should NOT be used to vilify and stereotype the peaceful and law abiding Muslim community in America,” the leaders of the All Dulles Area Muslim Society in Northern Virginia wrote on their website after the massacre. “Islam absolutely condemns and forbids terrorism and extremism. The Quran, Islam’s revered text, states: ‘Whoever kills a person, it is as though he has killed all mankind. And whoever saves a life, it is as though he had saved all mankind.’ ”

For Hassan Ahmad, a Northern Virginia lawyer, Mateen’s actions were “a reminder how much work goes into building inclusivity and coexistence, and how quickly it can be destroyed,” he wrote in a raw Facebook post. “If we let it.”

The country had just celebrated one of its most famous Muslims, Muhammad Ali, who “worked all his life and even in death brought people together,” Ahmad told me.

Indeed, Ali had been a voice of reason, even in the last months of his life.

“I am a Muslim,” he said, “and there is nothing Islamic about killing innocent people in Paris, San Bernardino, or anywhere else in the world. True Muslims know that the ruthless violence of so-called Islamic jihadists goes against the very tenets of our religion.”

Reports of hate attacks against U.S. mosques tripled last year compared with previous years, according to the Council on American Islamic Relations. Many Muslims think the attacks are being fueled not by terrorist attacks in Paris, Brussels, San Bernardino, Calif., and Orlando, but by the election-year rhetoric of Trump.

There was a time when the American conversation was about hope, discovery and growth, about a melting pot unlike any other the world has ever seen.

Today, we’ve allowed hate to grab the microphone and seize the stage. And we have to take it back.