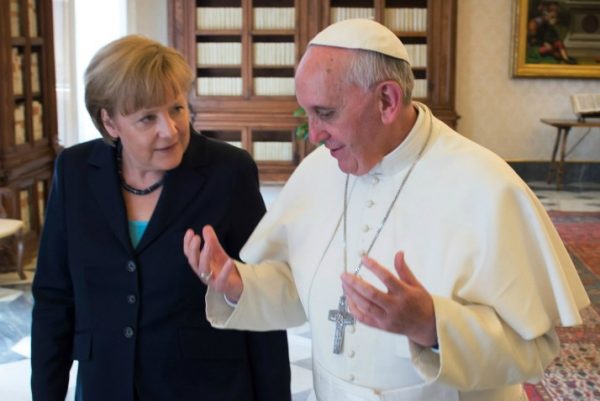 “I dream of a Europe where being a migrant is not a crime but a summons to greater commitment on behalf of the dignity of every human being,” Francis told a Vatican audience including German Chancellor Angela Merkel.

“A Europe that cares for children, that offers fraternal help to the poor and those newcomers seeking acceptance because they have lost everything and need shelter.”

The powerful speech praised the EU founding fathers who had “dared to change radically the models” that had led to World War II and praised their pursuit of integration in its aftermath.

“Today more than ever, their vision inspires us to build bridges and tear down walls,” Francis said in an apparent reference to moves by Austria and other countries to re-establish border fences in response to the continent’s biggest refugee crisis since 1945.

He also criticised the EU’s position on the economy and on youth employment, saying the bloc needs to “create dignified and well-paying jobs, especially for our young people”.

His hard-hitting message included a call for a total revamp of economic policies, and the creation of “new, more inclusive and equitable economic models”.

The 79-year-old pontiff was speaking at a ceremony to present him with the EU’s Charlemagne Prize for his contribution to European unification.

The heads of the EU’s main institutions, the Council, the Commission, the Parliament and its central bank attended the prize-giving ceremony.