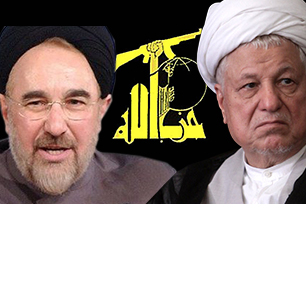 According to the Middle East Media Research Institute (MEMRI), a non-profit organization that monitors Arab and Iranian media, the threat came from Mahdi Abdi, the director of affairs for the northwestern provinces and towns for the coordination of Hezbollah Iran. Hezbollah (“Party of God”) Iran is closely associated with Khamenei and his dominant ruling faction.

Abdi accused the two former Iranian presidents of treason, saying “The heart of [Iranian] Hezbollah is bleeding because of the tremendous disloyalty and the great treason of the unwise and two-faced [pragmatic camp leaders Khatami and Rafsanjani].”

Abdi moved from talk of treason to threats:

“This is Hezbollah’s final warning to Hashemi [Rafsanjani] and the grey fox, [former president] Mohammad Khatami, and to anyone who even thinks about marginalizing the Imam Khamenei, trampling the principles and foundations of the Islamic Revolution, and seeking to present the plan for a leadership council [as Rafsanjani recently proposed as a replacement for the position of Supreme Leader] in order to weaken the Rule of Jurisprudent [“Rule of the Jurisprudent” refers to the Islamic Republic’s justification for government by Muslim clergy]. If they are thinking of sparking more ‘fitna’ [conflict, commonly used to describe civil wars in Islam or disturbances among Islamic believers] in Iran, Hezbollah will activate its popular punishment units, the ones called The Martyrs for the Revolution and Islam, and once and for all, blind the eyes of the ‘fitna.’”

MEMRI reported that Abdi demanded for Rafsanjani and Khatami to quit calling for the release of the 2009 Green Movement protest leaders, such as former Majils [Iran’s parliament] speaker Mehdi Karroubi and former prime minister Mir-Hossein Mousavi. Karroubi and Mousavi, among others, have been under house arrest by the regime since 2011.

A warning for Rouhani


Next, the Hezbollah leader offered a warning for current Iranian President Hassan Rouhani:

“Mr. President [Rouhani], many times the Koran called on Muslims to learn from history. We look at history today and see what became of those who trusted foreigners, especially those who trusted the bloodthirsty ‘Great Satan’ America. They all suffered harm…”

Abdi told Rouhani that Iran should not cooperate with the United States and should reject the Joint Comprehensive Plan of Action (JCPOA, the 2015 agreement between the United States Germany, France, Russia, the United Kingdom, China and Iran over the latter’s nuclear weapons program). Abdi said:

“Mr. President, you bear responsibility for every martyr whose blood has been spilled. If you look at all the breaches of promise and disruptions by ‘the Great Satan,’ America, and declare firmly that you are cancelling the JCPOA because of America’s violations [of it], history will never forget your heroic and revolutionary move; the heart of the Imam Mahdi will also rejoice because of you [Imam Mahdi refers to Shiite Islam’s awaited messiah].”

Abdi’s statements and the recent imprisonment by Khamenei and his allies of Rafsanjani supporters, such as the former president’s son Mehdi Hashemi Rafsanjani, may illustrate the divisions among ruling elites in Iran’s messianic theocratic government (“Rafsanjani’s son enters prison amid media circus,” Al-Monitor, Aug. 11, 2015).

However, this doesn’t mean that those currently opposing Khamenei are “moderates” in the Western sense of the word, as some have alleged.

Immoderate ‘moderates’
As CAMERA has noted (“The Media and the Myth of the Moderate Mullahs,” March 2, 2016), many major U.S. print news outlets have referred to Iranian leaders, such as Hassan Rouhani as “moderate.” Yet Rouhani has endorsed the use of illegal chemical warfare and claimed that United Flight 93, which crashed in Pennsylvania on Sept. 11, 2001 after passengers resisted an al-Qaeda take over, was “shot down by the United States Air Force.” A long-time servant of the regime in Tehran, he served as first secretary of the Supreme National Security Council when it decided to bomb Israel’s embassy and a Jewish community center in Argentina in the early 1990s.

In a May 3, 2016 article, The Washington Times (“Religious freedom report hits U.S. allies, adversaries”) noted that although Rouhani is “often characterized by international media as a moderate,” he has presided over religious persecution of those who do not share the regime’s views. Quoting a 2016 report by the U.S. Commission on International Religious Freedom, The Times wrote that Tehran had elevated “its own interpretation of Shia [Shiite] Islam above all others, [Iran] subjects its people—from Shia, Sunni, and Sufi Muslim dissenters to Bahais and Christian converts—to increasing religious freedom abuses, from harassment to arrests and imprisonment.”

The tendency by some in the press to misguidedly look for “moderate” regime members was noted in a May 3, 2016 U.S. News and World Report Op-Ed by Mideast analyst Emaneule Ottolenghi (“Moderate is a Misnomer in Iran”). Taking Seyed Hassan Khomeini, the grandson of the founder of the Iranian revolution, Ayatollah Ruhollah Khomenei, as an example, Ottolenghi highlighted media malpractice. He noted that the Financial Times called the younger Khomeini, a “moderate senior cleric.” The New York Times used a similar description.

However, as Ottolenghi pointed out, Tehran has sent Khomeini “to Latin America as part of its ongoing efforts to export its Islamic revolution in the Western Hemisphere.” While on his tour, he described Israel as “a cancerous growth” in the Middle East and called for its immediate destruction.

Ottolenghi noted that “moderate by Iranian standards bears little resemblance to moderation as understood in the West.”

Amid seemingly growing divisions among Tehran’s rulers, news media should avoid mistaking pragmatism in achieving stated radical objectives, such as undermining U.S. influence and destroying Israel, as a sign of Iranian temperance. Pragmatic and moderate are not synonyms, in Iran or anywhere else.
Camera