Some call for partitioning Iraq into a Sunni, Shiite , Kurdish zones 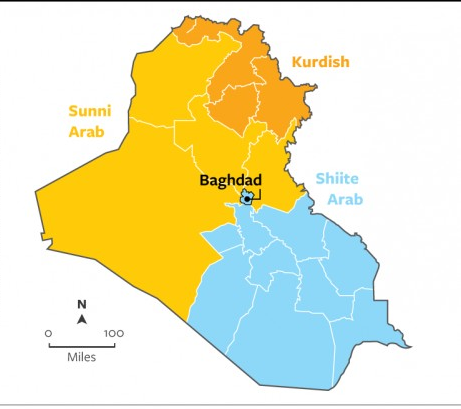 With tens of thousands of protesters marching in the streets of Baghdad to demand changes in government, Iraq’s Shiite prime minister, Haider al-Abadi, appeared before Parliament this week hoping to speed the process by introducing a slate of new ministers. He was greeted by lawmakers who tossed water bottles at him, banged on tables and chanted for his ouster.

“This session is illegal!” one of them shouted.

Leaving his squabbling opponents behind, Mr. Abadi moved to another meeting room, where supportive lawmakers declared a quorum and approved several new ministers — technocrats, not party apparatchiks — as a step to end sectarian politics and the corruption and patronage that support it.

But, like so much else in the Iraqi government, the effort fell short, with only a handful of new ministers installed and several major ministries, including oil, foreign and finance, remaining in limbo. A new session of Parliament on Thursday was canceled.

Almost two years after the Islamic State swept through northern Iraq, forcing the Obama administration to re-engage in a conflict it had celebrated as complete, Iraq’s political system is barely functioning, as the chaotic scenes in Parliament this week demonstrated.

With the surprise visit to Baghdad on Thursday of Vice President Joseph R. Biden Jr. — who, as a senator, called in a 2006 essay for the partition of Iraq into Sunni, Shiite and Kurdish zones — it seems fair to ask a question that has bedeviled foreign powers for almost a century: Is Iraq ever going to have a functioning state at peace with itself?

“I generally believe it is ungovernable under the current construct,” said Ali Khedery, an American former official in Iraq who served as an aide to several ambassadors and generals.

Mr. Khedery said that a confederacy or a partition of Iraq might be the only remedy for the country’s troubles. He called it “an imperfect solution for an imperfect world.”

Writing last year in Foreign Affairs, Mr. Khedery said Washington should “abandon its fixation with artificial borders” — a reference to the map of the Middle East drawn by the British and the French after the collapse of the Ottoman Empire at the end of World War I — and allow Iraq to break up.

With the Islamic State in control of territory in Iraq and Syria; expanding into Libya, Afghanistan and elsewhere; and having carried out attacks in Paris and Brussels, it is perhaps easy to forget that the group rose in the first place as a consequence of the failure of politics in Iraq — in that case, the sectarian policies of Mr. Abadi’s predecessor as prime minister, Nuri Kamal al-Maliki, also a Shiite.

American officials have said that maintaining Iraq’s unity is still their policy, but United Nations officials in Baghdad have quietly begun studying how the international community might manage a breakup of the country.

The political problems of Iraq have been made worse by the collapse in the price of oil, the country’s lifeblood; the grinding war against the Islamic State; and, more recently, fighting between Shiite militias and Kurds in the north that analysts worry could foreshadow a new, violent struggle in the country.

Iraq, it seems, is stuck in a cycle of history that endlessly repeats.

Mr. Biden has worked to promote Iraqi unity, despite his proposal a decade ago to divide Iraq into thirds. But in comments on Thursday to American diplomatic and military personnel in Baghdad, he harked back to that proposal.

“Think of all the places we are today trying to keep the peace,” he said. “All the places we’ve sent you guys and women. They’re places where, because of history, we’ve drawn artificial lines, creating artificial states made up of totally distinct ethnic, religious, cultural groups, and said: ‘Have at it. Live together.’ ”

Almost 100 years ago, Gertrude Bell, the British official and spy who is credited with drawing the borders of modern Iraq after World War I, fretted about the project. In creating a new nation, she wrote, “we rushed into this business with our usual disregard for a comprehensive political scheme.” A coming documentary, “Letters From Baghdad,” explores the life and legacy of Ms. Bell, demonstrating how little has changed in Iraq over a century.

Even today, her legacy is felt: This week, Mr. Abadi put forward Sharif Ali bin Hussein, a descendant of King Faisal, who was chosen by Ms. Bell in 1921 to rule Iraq, as foreign minister. But lawmakers rejected him as a reminder of Iraq’s failed monarchy.

Much of what troubles Iraq today is the legacy of Saddam Hussein’s brutality. Shiites and Kurds, oppressed under Mr. Hussein’s Sunni-dominated administration, have been unable to overcome their grievances. Sunni Arabs say their entire community has been unfairly marginalized for the crimes of Mr. Hussein.

“Iraq, it seems, has a long memory but is short on vision,” Kate Gilmore, a human rights official at the United Nations, said this week in unusually descriptive language after visiting Iraq. “It is like a vehicle traveling over rocky terrain, with a large rearview mirror but only a keyhole for a windscreen, despite a vicious contest for the wheel. The dominant narrative among many of Iraq’s leaders is of ‘my community’s grievance,’ failing to acknowledge the widespread nature of Iraqis’ suffering and failing to chart a course for an inclusive future.”

Mr. Maliki, in an interview this year with The New York Times, acknowledged that he had been unable, while in office, to overcome this history.

“The Kurds want compensation for the past,” said Mr. Maliki, who seems determined these days to undermine Mr. Abadi at every turn. “The Shia, too. Sunnis still fear from the majority and fear being called in to account for what Saddam did.”

Divisions within the Shiite leadership — with Mr. Maliki and others pushing back against Mr. Abadi’s efforts at restructuring — are also at the core of the current political crisis.

Mr. Maliki, whose grandfather participated in an armed uprising against the British in the 1920s, became one of Iraq’s three vice presidents after he lost the prime minister’s post in 2014. One of the first changes proposed by Mr. Abadi last summer, when he faced protests, was to eliminate the offices of vice president. But two of the occupants refused to leave, even though their salaries were cut off.

One of those was Mr. Maliki, who still occupies his palace and insists he is still a vice president of Iraq.

Still, he said he had no ambition to return to office, even though many Iraqi officials and Western diplomats believe he has been scheming to do so.

Hadi al-Ameri, a Shiite rival to Mr. Abadi, who runs a powerful militia that is supported by Iran, is seen by many as harboring ambitions to replace him.

Even so, Mr. Ameri said, “only if I were crazy would I accept” the job of prime minister.

“We don’t have democracy in Iraq,” he said. “Here, everyone wants to drive the car. The winner and the loser.”

He added, as a way of defending Mr. Abadi’s failures in uniting the Iraqi state, “Even if a prophet came to rule Iraq, he wouldn’t be able to satisfy all sides.”