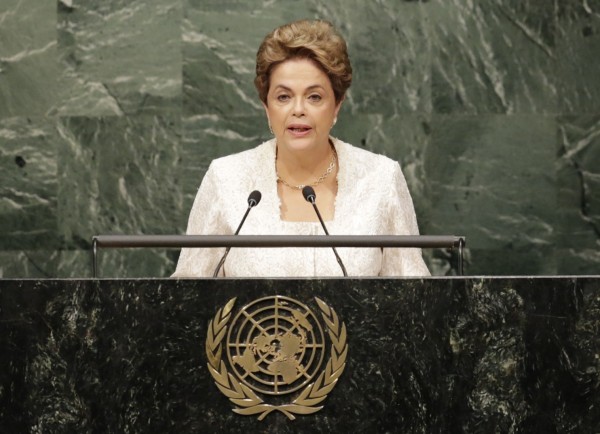 Brazilian President Dilma Rousseff alluded only briefly to the political crisis rocking her government during an address before the United Nations on Friday, slipping in a mention at a signing ceremony for the Paris Agreement on climate change.

Many in Brazil had expected Rousseff, who is facing impeachment for breaking fiscal rules in her managing of the budget, to use the U.N. platform to make her case to the world leaders gathered at the conference. Rousseff has repeatedly argued that the effort to oust her amounts to little more than a bloodless coup.

Opposition leaders, including Vice President Michel Temer, had sharply criticized Rousseff this week for traveling to New York, arguing the impeachment movement was legal and that the leader of Latin America’s largest nation shouldn’t be badmouthing the country to the rest of the world.

However, Rousseff mostly stuck to issues related to climate change, promising to reduce deforestation the Amazon rainforest to zero and recuperate tens of millions of acres of degraded forests and pastures.

“I cannot conclude my remarks without mentioning the grave moment Brazil is undergoing. Despite this, I must say that Brazil is a great nation, with a society that was able to defeat authoritarianism and build a vibrant democracy, she said in her only remarks about the crisis. “Our people are hard-working and have great esteem for freedom. I have no doubt they will be able to prevent any setback.”

The impeachment proceedings against Rousseff stem from allegations that illegal accounting tricks allowed her administration to use government spending to shore up flagging support.

Rousseff has defended such fiscal maneuvers as common practice in Brazil. She insists the accusations are a flimsy excuse by the traditional ruling elite to grab power back from her left-leaning Workers’ Party, which has governed for 13 years.

The lower Chamber of Deputies didn’t agree. On Sunday, the body voted in favor of impeachment. The measure now goes to the Senate, which is expected to make a decision by mid-May. If the Senate decides by a simple majority to take it up, Rousseff would be suspended for up to 180 days while a trial is conducted. During that time, Temer would take over.

Rousseff has called the impeachment effort an act of “violence against democracy.” She has also frequently pointed out that many of the people leading the impeachment drive against her, including Eduardo Cunha, the speaker of the lower Chamber of Deputies, are facing corruption allegations.