The Castros are in no hurry to make room for new Cuban blood. 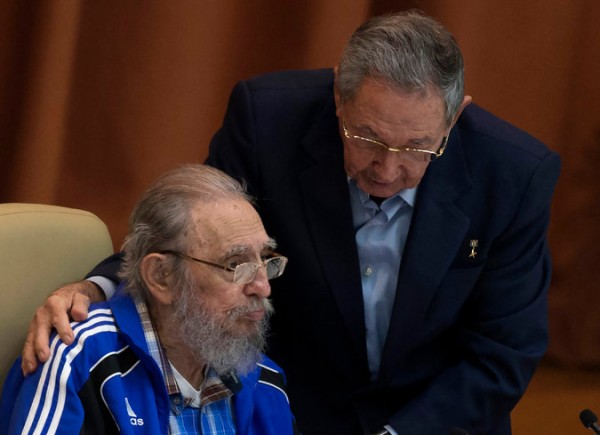 “Soon, I will be 90,” said Mr. Castro, 89, who spoke in a strong but rasping voice at the close of a four-day party congress in Havana, according to official press reports. Mr. Castro’s birthday is on Aug. 13.

“Our turn comes to us all,” added Mr. Castro, who made his longest public address in years clad in a blue track jacket, “but the ideas of Cuban communism will endure.”

While Mr. Castro seemed to take his leave on Tuesday, others in his cohort signaled their intentions to stay put. The Communist Party announced that Mr. Castro’s brother, President Raúl Castro, 84, and the president’s hard-line second-in-command, José Ramón Machado Ventura, 85, would continue to lead the party for at least part of another five-year term.

Their re-election indicates that despite a dramatic shift in relations with the United States and tentative economic changes, the leaders of the Castros’ generation are in no hurry to make room for new blood. It is a blow to younger Cubans who are eager for a more pluralistic system led by people closer to their own ages and unencumbered by socialist orthodoxies.

Cubans are leaving the island in record numbers, tired of waiting for change and worried that better relations with the United States, while creating new economic opportunities, will end the privileges that make it easier to migrate.

Even among those who support the socialist system, there is a sense that younger leaders, like Miguel Mario Díaz-Canel Bermúdez, the country’s first vice president, who turns 56 on Wednesday, are being passed over.

“We need deep change in the party,” said Harold Cárdenas Lema, founder of the blog La Joven Cuba, over the weekend.

President Castro has for years talked of the need to prepare younger people to take the helm. But Mr. Cárdenas, who spoke by Skype from Havana, said that young leaders already existed but just had no public profile.

Carlos Alberto Pérez, who writes under the name La Chiringa de Cuba, said on Tuesday, also by Skype, that he was not surprised by the party’s decision to keep President Castro and Mr. Machado in place.

“The transition is planned for 2018 when Raúl steps down,” said Mr. Pérez, referring to President Castro’s pledge to give up the presidency, although he is likely to remain in charge of the Communist Party, a postion just as powerful.

“Anyone who thought there would be a change now was dreaming,” he said.

Fidel Castro’s speech capped the party congress, during which the Communist leadership railed against the threat of introducing other political parties, acknowledged the need for nimbler economic management and accused the United States of using the private sector as a Trojan horse intended to undermine Cuba’s government.

In a speech on Saturday, Raúl Castro warned that a multiparty system “would be the beginning of the end,” and blamed “unscrupulous” middlemen for the high prices of basic goods.

But the Cuban president also noted, with approval, that the state sector employed 70 percent of the country’s work force in 2015, down from 81 percent five years earlier, and the party agreed to expand pilot projects to further liberalize the economy.

And while the party leadership remained the same, some protégés of Mr. Díaz-Canel were appointed to senior Communist Party positions.

The tone of the congress — with the party clinging to the political status quo but accepting more economic liberalization — was a sign that changes would continue but were unlikely to gather speed, said Arturo López Levy, a lecturer at the University of Texas who worked for the Cuban Interior Ministry in the 1990s.