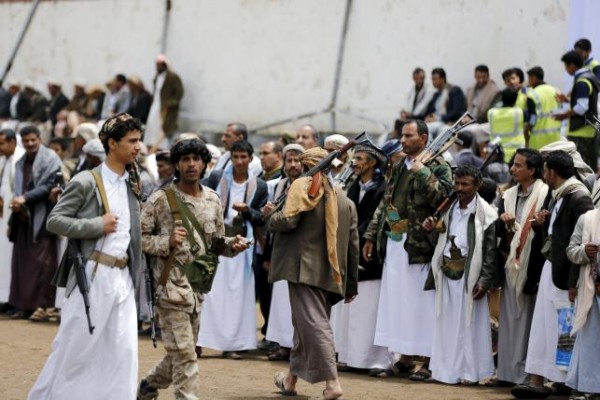 Tribesmen loyal to the Houthi movement attend a gathering in Yemen’s capital Sanaa, April 17, 2016. REUTERS/Khaled Abdullah
Share:
Yemen’s warring parties are sending conciliatory signals ahead of U.N.-backed talks starting on Monday, in a rare sign of mutual willingness to end a year-old conflict that has caused one of the world’s worst humanitarian crises.

A deal may help defuse tensions between regional powerhouses Iran and Saudi Arabia, who are allied to opposing sides in Yemen and whose rivalry has helped fuel wars and political struggles across the volatile Middle East.

Air strikes and heavy combat persist in many parts of the country, while armed forces who could yet play a spoiling role loom throughout Yemen’s tangled political scene.

Police said they foiled two car bomb attacks in the southern port of Aden on Sunday. In one case a policeman died when a car exploded after police opened fire on it rushing at a checkpoint at high speed.

But the recent rhetoric of the main combatants has been unusually mild.

“We are ready for a political transition which excludes no one … The world now looks to the Kuwait consultations as a landmark of peace for Yemenis, and we will give everything we can to alleviate the suffering of the people,” Foreign Minister Abdel Malek al-Mekhlafi, from the Saudi-backed government now based in Aden, told state news agency Saba.

Mohammed Abdul-Salam, spokesman for the Houthi movement which controls the capital Sanaa and which Gulf Arab states say is allied to Iran, appeared conciliatory in an interview with Kuwaiti newspaper al-Rai on Saturday.

“There should be a consensus authority during a definite transitional phase to decide every political dispute,” he was quoted as saying. “Iran does not have any role in our sovereign decisions and we are not tools in anyone’s hands.”

In a further sign of goodwill, he said on his Facebook page that his group had received 30 prisoners from the government side.

Saudi Arabia and its Gulf Arab allies joined the war on March 26 of last year to back Yemen’s government after it was pushed into exile by the Houthis.

U.N. talks in June and December failed to end the war that has killed about 6,200 people, about half of them civilians. The war has allowed al Qaeda fighters to seize territory and opened a path for Islamic State militants to gain a foothold.

A partial naval blockade imposed by the Arab coalition has caused food shortages and prices for necessities to skyrocket in the Arabian Peninsula’s poorest country.

An unprecedented calm achieved between the two main antagonists beginning in March suggests that exhaustion over costs and casualties may be mounting. The Houthis agreed with Saudi Arabia to reduce attacks on the kingdom in exchange for a halt to Saudi-led air strikes on Sanaa, and the two sides carried out a prisoner exchange.

“This represents the best opportunity to end the war since it started – real progress has been made,” said Adam Baron, a visiting fellow at the European Council on Foreign Relations.

The fate of Ali Abdullah Saleh, Yemen’s president of 33 years who was ousted by “Arab Spring” protests in 2012 and who has formed an alliance with the Houthis, remains unclear and could complicate transition plans.

While Saleh’s party will take part in the talks, the former leader has refused to depart Yemen’s political scene. The spread of al Qaeda and Islamic State in the south also makes it more difficult to resolve the conflict.

“There are a slew of potential spoilers. The past year has seen a proliferation of warlords whose power is tied to the conflict continuing,” added Baron.

Hailing from a Shi’ite sect that ruled a thousand-year kingdom in northern Yemen until 1962, the Houthis said they were leading a revolution against corruption. They pushed President Abd-Rabbu Mansour Hadi from power in September 2014 and formed an alliance with his predecessor Saleh.

Regional Arab countries accuse the group of a power-grab which would benefit their archrival Iran, and have fought to restore Hadi’s government.