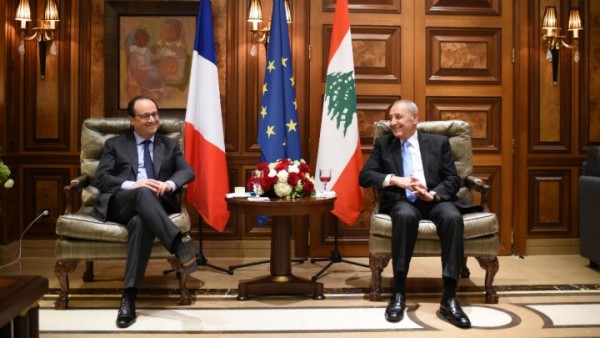 French President Francois Hollande arrived in Lebanon on Saturday at the start of a four-day tour of the Middle East.

Hollande was to spend the first two days in Lebanon and then travel on to Egypt and Jordan.

In Beirut on Saturday, Hollande was expected to meet with Lebanese parliament speaker Nabih Berri and Prime Minister Tammam Salam.

On Sunday, the French leader will travel to an informal Syrian refugee camp in Lebanon’s eastern Bekaa Valley to speak to families who will be resettled in France.

Lebanon is home to more than a million Syrian refugees, the equivalent of a quarter the country’s population of 4.5 million. There also about 400,000 Palestinian refugees spread in 12 camps.

The Syrian conflict has deepened the divide between Lebanon’s own political factions, paralysing government institutions.

Parliament has extended its own mandate twice, and Lebanon has been left without a president since May 2014.

Hollande is also expected to underline France’s support for the Lebanese army, after Saudi Arabia suspended a grant to finance $3 billion worth of French weaponry for Lebanon earlier this year. 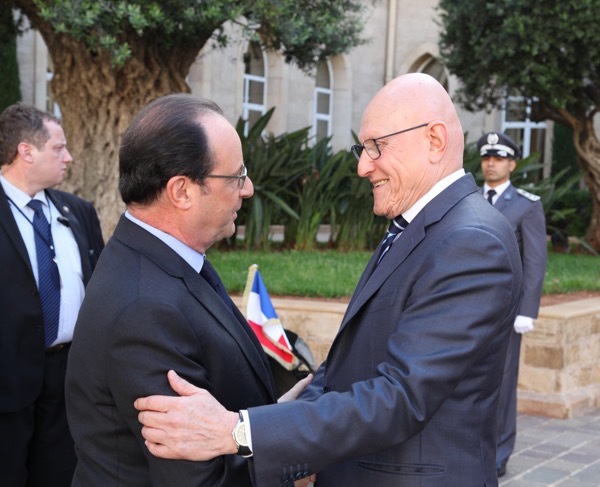 Hollande said that he was eager to make a third trip to Lebanon to meet with the country’s new head of state, calling for the swift election of a president.

“I want to visit Beirut again when there is a president in Lebanon but the issue lies in the hand of Lebanese lawmakers … who should resolve the deadlock and elect a head of state,” said Hollande following talks with Speaker Berri.

“France stands by Lebanon and is keen on consolidating security in Lebanon through military cooperation,” he said during a short press conference that he held with Berri.

The speaker said he discussed with Hollande military aid to Lebanon, the demarcation of the maritime border, terrorism and the regional tension.

Following their meeting, the French president headed from the parliament in downtown Beirut’s Nejmeh Square to the nearby Grand Serail where he held talks with Prime Minister Tammam Salam.

Salam said at a joint press conference that Hollande stressed to him “French keenness on Lebanon’s independence and sovereignty, and the functioning of state institutions which requires a president first.”

The PM also hoped that Paris would “resume its efforts to push for the election of a new head of state.”

Hollande praised Salam and said France stands by Lebanon due to their historic ties, geographic proximity and relations that were developed between the two countries one generation after the other. 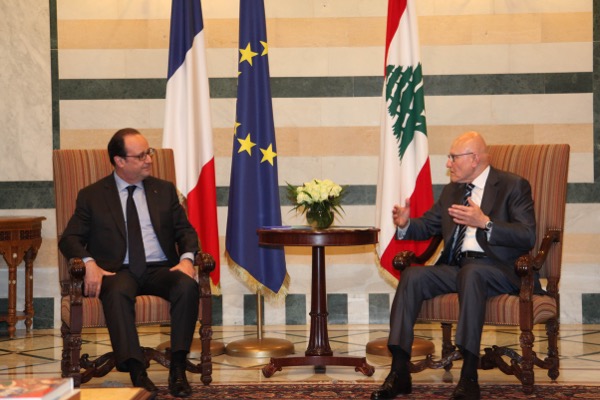 He reiterated that a president should be swiftly elected and said France will provide military assistance to Lebanon as quickly as possible.

The French defense minister will hold talks with his Lebanese counterpart to hear the demands of the Lebanese army, Hollande told reporters.

He also revealed that French assistance to the Syrian refugees in Lebanon will reach 50 million euros this year and 100 million euros in the coming years.

The official welcome ceremony for Hollande, who was on a two-day visit to Lebanon, was held at the parliament building since Lebanon has been without a head of state for almost two years.

Hollande carries a message that will urge the Lebanese and its regional partners to distance the country from regional turmoil, a senior French official at the Elysee Palace told the National News Agency.

“Hollande carries with him a stern message that includes calling the Lebanese and the regional partners to take some steps in order to separate the situation in Lebanon from the regional tension particularly in the security files,” the unnamed source said on condition of anonymity.

“The institutional crisis and the divisions over the regional situation have been weakening the state’s policies because of the presidential vacuum,” it added.

Lebanon has been in a presidential vacuum since the term of President Michel Suleiman ended in May 2014.

“Hollande will confirm France’s support for Lebanon which is facing an unprecedented humanitarian crisis,” said the source.

Visiting a Syrian refugee encampment is one of the French President’s plans where he will meet with a family from Syrian origin. He is set to meet another two families residing at the International Red Cross headquarters who are preparing papers for residency in France.

The French president will reiterate that “his country assumes responsibility towards the refugees and countries neighboring Syria. Paris has announced in September 2015 that it will grant 100 million euros of additional aid to these countries, of which 40 million are for Lebanon,” the source said.

Hezbollah snubs Hollande
Although Mohammad Ra’ad, Hezbollah’s parliamentary bloc leader, was expected to meet President Francois Hollande on Saturday and Sunday, Al Jadeed television confirmed that the Hezbollah had turned down the meeting.

Hezbollah could have been under pressure from Iran to rebuke the French president after Iran, itself, was rebuked at the Organisation of Islamic Cooperation summit in Istanbul this weekend.

The bold move points to an emboldened Iran, that no longer cared to entertain Arab and Western criticism against it. In the current situation, Iran seems adamant not to unravel the Lebanese Gordian knot that Hollande presumably wished to untangle.

Lebanon has been without a president for nearly 2 years because each time the parliament met it failed to establish quorum to carry out the vote.

After over a year of deadlock, Geagea, in a surprise move, announced his support for Aoun as president.

Despite the agreement, Hezbollah MPs and their allies have failed to elect Aoun, despite the fact he would receive the majority of parliament votes.

The inaction has led observers to believe that Hezbollah has orders from Iran not to elect a Lebanese president and maintain the status quo as a weakened state.

On Friday, former Lebanese Speaker Hussain Hussaini floated the idea of voting for a caretaker president with a single-year term.