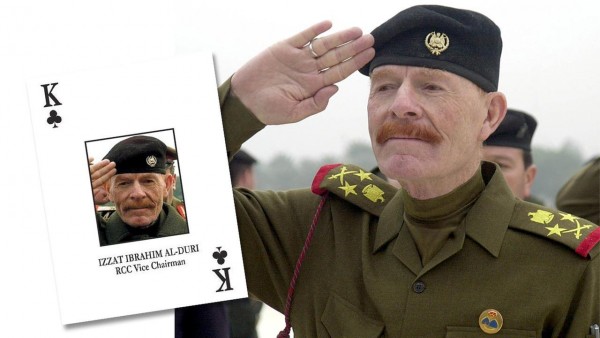 Former Saddam Hussein deputy Izzat Ibrahim al-Douri is pictured on the deck of cards put out by the U.S. military to help capture most wanted officials of Saddam Hussein’s regime
Share:

The footage purportedly featuring Ezzat al-Douri was released on Thursday, the anniversary of the fall of Saddam’s Sunni-led rule when U.S. troops stormed Baghdad in 2003. Reuters could not authenticate it but analysts said it seemed genuine judging by his appearance and speech.

Douri, a wiry man with a ginger mustache, evaded capture during the 2003-11 U.S. occupation and Iraqi and U.S. officials accused him of organizing an insurgency by minority Sunnis against U.S. troops and the new Shi’ite led authorities in 2005-7.

In a previous audio message, the former top official in Saddam’s secular Baath party urged Sunnis to join those who had “liberated” half the country, referring to Islamic State, which declared a caliphate in large parts of Iraq and Syria in 2014.

This time Douri called on the “sons of Iraq … to rally behind the flag of the Arab coalition led by the kingdom of Saudi Arabia in order to avoid being burnt by the Persian fire.”

The latest message follows major gains by the government and its U.S.-led backers against Islamic State and coincides with a push to drive the hardline militants from Mosul, the largest city in their self-proclaimed caliphate.

“Douri and the Baath have no military importance now, but as Daesh (Islamic State) is weakening, the Baath appears to see a role as part of the Saudi-led alliance against Iran,” said Hisham al-Hashimi, a Baghdad-based security analyst.

That marginalization and revenge attacks by Shi’ite militias were seen as contributing to the rise of Islamic State.

A Shi’ite militia has declared it will join the fight to drive Islamic State from Mosul, which has stalled: Iraq’s top Sunni official has urged the government not to allow militia to join.

TURN BACK THE CLOCK

The clip appeared to show Douri, who would now be 73, close up wearing his old green military uniform. Its tribute to Sunni power Saudi Arabia was a new development because the kingdom was a long-time rival of Saddam who had his own regional ambitions.

Carried on Saudi-owned al-Hadath TV, it was unclear when it was recorded as the only time indication was a reference to the Saudi-led campaign against Yemen’s Iran-backed Houthis which started in March 2015.

“The video is meant to prove that the Baath party’s leadership still exists and has a program,” said Hashimi. But “Iraq changed radically over the past 13 years and it will be impossible for the Baath to turn back the clock.”

Iraqi authorities said in April 2015 that Douri had been killed in a military operation and showed pictures of a body that resembled his. An Iraqi government spokesman did not respond to requests for comment this week.

Sitting behind a desk and wearing glasses in the video, the man appearing to be Douri read a statement from a pile of papers clutched in both hands that blamed the “U.S. administration for everything that Iran is doing in Iraq with its agents, its militias and its security and military services”.

The message, said Ihsan al-Shammari, politics professor at Baghdad University, was aimed at stirring sectarian fears to try to bring the Baath party back to the fore.

“But democracy is moving forward in Iraq, away from Douri and the Baath,” al-Shammari said.