Beirut’s River of Trash Nearing a Kilometer in Length 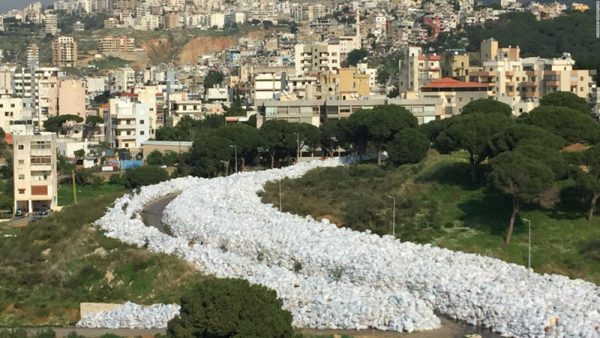 File photo: Thousands of tons of household waste, cutting a path through the greenery like a natural river of garbage, Beirut, Lebanon
Share:
From afar it might look like a pathway of white pebbles snaking its way through the cosmopolitan capital of Lebanon, but it’s actually just a landfill overflowing with stinking garbage bags. Nicknamed ‘river of garbage’, this urban monstrosity stretches hundreds of meters through the Jdeideh municipality in the city’s suburbs.

The problem apparently began in July last year, when authorities closed down the main landfill site that collected the city’s garbage. Since they did not provide an alternate garbage dumping site, rising mounds of garbage started appearing on the streets of Beirut. In Jdeideh, a makeshift dumpyard was created four months ago near a few residential buildings, where people tossed all their garbage. It has grown in size since then, resulting in the unsightly ‘trash river’ that now stands testament to the city’s garbage crisis and the nation’s dysfunctional politics. “This used to be such a beautiful place, but look at it now. We can’t even walk by it,” one local told reporters, in February.

Although it’s a blemish on the otherwise beautiful city landscape, locals are more worried about the serious health and pollution problems that the toxic trash river presents. They fear that rains might be flushing toxins into the water system, and that, as summer approaches and temperatures begin to rise, air pollution and diseases will pose a serious threat to the local population. Public health officials and experts from the American University of Beirut have found a significant rise in levels of airborne toxins and they’re particularly worried about the spike in carcinogens.

When a British company was brought in to find a way to export the trash to Russia, everyone breathed a sigh of relief, thinking the city’s trash problem will be resolved. But the company failed to submit paperwork showing that Russia would accept the garbage, within an agreed deadline, so the deal fell through. According to Mona Kalot, spokeswoman for Lebanon’s Council for Development and Reconstruction (CDR), there is no backup plan. “We don’t have a solution, but they’re working on something else,” she told CNN, a month ago. “I don’t think it will be transferring (the trash) outside Lebanon.”

Fed up with the garbage crisis that is rocking the nation, residents have taken to protesting on the streets, throwing eggs and even using a huge catapult to fling trash bags at the prime minister’s office. Some protests have turned so violent that the government has had to resort to using tear gas, water cannons, and arresting demonstrators. On one occasion, the army had to be brought in to control a crowd.

Other citizens have chosen to use comedy, creating a parody of a promotional video shot using drones and released by Lebanon’s tourism ministry in February. While the original video shows off the nation’s picture perfect cities, snow-capped mountains, and pristine rivers, the parody, created by the You Stink movement is quite the opposite. It uses the same sound track of new-age music but sets it against extremely hideous piles of trash.

“We wanted to counter the lies of the ministry of tourism,” said activist Aly Sleem, speaking to The Guardian. “They are talking about a green Lebanon, and this is humiliating us as Lebanese. Trash covers forests, rivers, and lots of areas which are considered touristic.” The Lebanese tourism minister has threatened to sue the creators of the video, for using the ministry’s logo. “They only care about their logo,” Sleem lamented. “Not about the garbage.”

Under pressure from the local population and international environmental agencies, the Lebanese Government recently decided to reopen the Naameh landfill for two months, despite the fact that it infringes on the Barcelona Convention regarding the establishment of landfills along the Mediterranean coast. The decision infuriated the people living around Naameh, but there was nothing they could do about it, since the garbage trucks started arriving with a heavily armed escort, in order to prevent any attempts to stop them.

More than 8,000 tons of garbage has been collected so far in an effort to remove Beirut’s river of trash.