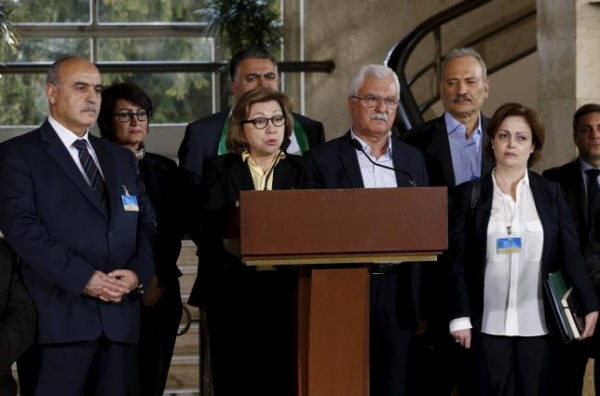 Bassma Kodmani (3rd L) of the High Negotiations Committee (HNC) gives a news conference after a meeting with U.N. mediator for Syria Staffan de Mistura during Syria peace talks at the United Nations in Geneva, Switzerland, March 24, 2016. REUTERS/Denis Balibouse
Share:
The main Syrian opposition group has wrapped up the latest round of indirect peace talks by urging Russia to “use its leverage” on President Bashar Assad’s government to fulfil international hopes for a political transition.

Bassma Kodmani, a leader of the opposition High Negotiations Committee, told reporters Thursday in Geneva that it wants greater access for humanitarian aid and decried continued sieges by government forces on Syrian municipalities.

She said she hopes the next round of talks in April will be more “substantive.”

Another HNC member told The Associated Press that de Mistura has given the two delegations a document representing his “vision” for a solution to the five-year war, such as reforming state institutions, rejecting terrorism, rebuilding the Syrian army and paving the way for the return of refugees.