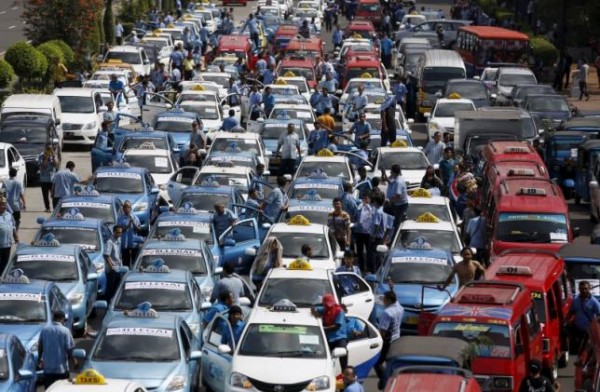 Indonesian cabbies clashed with motorbike drivers working for online apps on Tuesday, pulling them off their bikes and assaulting them as thousands of drivers took to the streets of Jakarta calling for a ban on ride-hailing apps like Grab and Uber.

Police were overwhelmed as convoys of blue and white taxis operated by PT Blue Bird and PT Express Transindo Utama blocked thoroughfares. Police said 83 people were detained after skirmishes that saw drivers smash taxi windshields, attack other drivers and burn tyres in parts of the city.

The proliferation of cheap taxis using ride-hailing apps Go-jek, Grab and Uber in gridlocked Jakarta has made the traditional pick-up and drop-off taxi services unprofitable, threatening the business models of the country’s top taxi firms.

The online apps currently offer heavily subsidized rates for their rides in an attempt to gain market share.

“Right now there are legal taxis and illegal taxis,” said Mat Ali, 54, an Express taxi driver who marched in front of parliament as others burned tyres.

“We are not allergic to competition with Uber and Grab … but we just want them to meet the government’s requirements.”

Transportation Minister Ignasius Jonan said companies like Uber were illegal unless they were registered as public transport providers and subject to the same rules as regular taxi operators.

“The point is, it has to be fair,” Jonan told reporters.

Government ministers called for calm and said the tech firms should be subject to the same legal and tax requirements as conventional public transportation companies.

“Give us time to find the best solution, it can’t be done overnight,” chief security minister Luhut Pandjaitan told a news conference.

A Bluebird official said the company would offer free taxi rides for 24 hours to make up for the disruption in services.

But some Jakarta residents rejected the offer on social media using the hashtag #NoThanksBluebird.

David Santoso, a director of Express, also said in a statement the company had urged its drivers not to join the protest.

Indonesia’s president has welcomed the competition provided by the new companies, but the status of their operations in the country was unclear.

Companies like Grab and Go-jek were running as usual on Tuesday despite the protests.

“We’ve advised our drivers and passengers to be careful in the areas where the demonstrations are happening,” said Ekhel Chandra Wijaya, of Grab Indonesia.

One Go-jek driver said he wasn’t afraid of the protesters.

“We in the online business are looking for money, we’re not looking for trouble,” said Abdul Rohman, who wore the company’s easily recognizable green jacket.