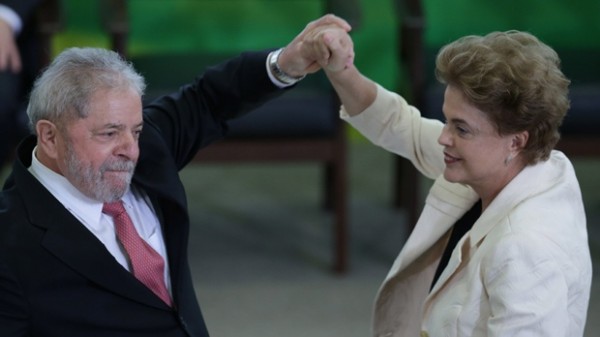 Brazil’s former President Luiz Inacio Lula da Silva and President Dilma Rousseff raise their arms together to celebrate the swearing-in of Silva as the newly-appointed chief of staff, at the Planalto presidential palace, in Brasilia, Brazil, Thursday, March 17, 2016. Rousseff insisted Silva would help put the troubled country back on track and denounced attempts to oust her. A Brazilian federal judge moved Thursday to block the controversial swearing-in. (AP Photo/Eraldo Peres)
Share:

“Lula,” as the two-time former president is known, was sworn into the Cabinet post amid heated protests by opponents, who say the move is an attempt to shield him from a corruption investigation.

Under Brazilian law, senior political figures can only be tried in the Supreme Federal Court, meaning any prosecution against Lula da Silva would effectively be delayed if he were chief of staff.

The swearing-in took place amid chaotic scenes in Brazil’s capital, Brasilia, with protesters shouting “shame” while government supporters sang “Lula” to the tune of a soccer chant.

However, a federal judge in Brasilia, Itagiba Catta Preta Neto, swiftly issued a preliminary injunction to suspend Lula da Silva’s swearing-in on the grounds his appointment prevented the “free exercise of the Judiciary Power, the operation of the Federal Police and of the Federal Prosecutor’s Office.”

In response, Brazil’s attorney general said he would appeal the injunction, state-run news agency Agencia Brasil reported. The agency later reported that he had filed the appeal.

At a news conference, the attorney general said Lula da Silva did not misuse power by becoming chief of staff and that the federal judge is not impartial. The judge has been critical of Rousseff on social media, according to Agencia Brasil.

Amid the dramatic scenes at the swearing-in ceremony, three people were arrested when pro- and anti-government factions clashed in front of the Presidential Palace in Brasilia and had to be dispersed by military police, the news agency said.

The ceremony took place a day after mass protests calling on Rousseff to resign, following another judge’s release of an explosive secretly recorded phone conversation between her andLula da Silva on Wednesday.

Rousseff’s opponents said the call lends support to their allegation that the former president’s appointment to the Cabinet post is to help give him greater legal immunity from federal prosecutors, handing him a trump card against investigators.
Rousseff denied the accusation, saying there is an innocent explanation for the conversation.

Her Workers’ Party has become ensnared in a wide-ranging graft probe centered on state-run oil company Petrobras — an operation known as “Car Wash.”

Nearly two weeks ago, federal police questioned Lula da Silva — Rousseff’s predecessor as president and close political ally — on suspicion he benefited from the scheme and raided his home.

Public anger turned to outrage Wednesday when, in the wake of the announcement of Lula da Silva’s new role, the federal judge overseeing the “Car Wash” investigation released tapes of the secretly recorded conversations, saying they showed the pair were apparently trying to influence or gain assistance from courts and prosecutors in the ex-president’s favor.

In a dispatch accompanying his release of the nearly 50 audio recordings, Judge Sergio Moro noted that it appeared that Lula da Silva “already knew, or at least suspected, that he was being recorded by the Federal Police, compromising the spontaneity and credibility of several of the dialogues.”

In one key exchange, relating to Lula da Silva signing the “term of office” paperwork necessary to assume the post, Rousseff said, “We’ll only use it in case of emergency.”

Releasing a copy of the document under discussion in the call — the certificate Lula da Silva was required to sign to assume the post — Rousseff’s office said the phrase simply referred to the eventuality that he would need to use the document if he did not attend the swearing-in ceremony in person.

Rousseff slammed the judge’s release of the recordings, calling it illegal, anti-democratic and an affront to the rights of the presidency. Many in her party have referred to the allegations against Rousseff and Lula da Silva as politically motivated.

The developments have only fueled political tensions in the recession-hit country as it gears up to host the Olympics in Rio de Janeiro in August.

Tens of thousands of protesters took to the streets of major Brazilian cities Wednesday night, demanding Rousseff step down. Police used rubber bullets, tear gas and pepper spray to disperse protesters who were throwing cans outside the Presidential Palace in Brasilia, state-run news media reported.
The demonstrations followed mass protests Sunday in which hundreds of thousands turned out across the country, calling for the president’s resignation.

Lula da Silva, a former union leader who helped found the Workers’ Party in 1980, was Brazil’s president from 2003 to 2010. He left office with a 90% approval rating, delivering the reins to his chief of staff and handpicked successor, Rousseff.

At the swearing-in ceremony Thursday, Rousseff introduced Lula da Silva as her “dearest colleague” and “a great political leader” with the “incomparable capacity to look in the eyes of our people and to understand these people and want the best for these people.”
A day earlier, she thanked him for agreeing to serve in her administration as the country struggled through its longest recession since the 1930s, saying he would be “a huge boost for my government.”

Christopher Sabatini, an adjunct professor at Columbia University’s School of International and Public Affairs, said that while Rousseff was trying to sell Lula da Silva’s appointment as driven by the need to harness his expertise, “the timing of it does not smell right.”

“The risk is that doubling down on this strategy is only going to really stain this administration even more,” Sabatini told CNN.
Impeachment proceedings against Rousseff have already been opened in Congress over alleged attempts to hide budget shortfalls before the 2014 elections.

In the lower house of Congress on Thursday, lawmakers met to nominate members of the 65-strong commission that will hear the impeachment charges against her. The lower house later approved the the special committee that will review the request for impeachment, Agencia Brasil reported.

Lula da Silva has expressed a desire to run for the presidency again in 2018.