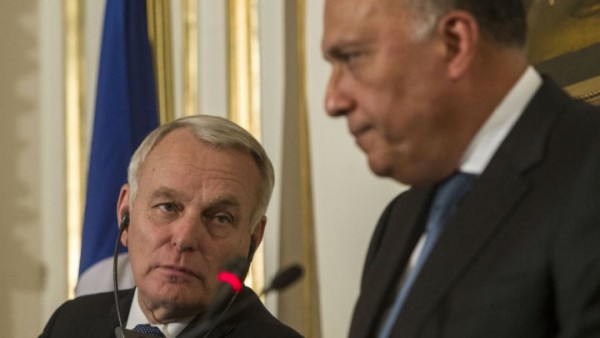 Paris will not “automatically” recognise a Palestinian state if a French initiative to host an international conference to revive the peace talks fails, Ayrault said on a visit to Cairo.

His predecessor, Laurent Fabius, had stirred Israeli anger in January by proposing such a conference and saying France would “recognise a Palestinian state” if peace talks failed.

“There is never anything automatic. France will present its initiative to its partners. It will be the first step, there is no pre-requisite,” Ayrault said when asked by a journalist in Cairo about Fabius’s remarks.

Ayrault is on a two-day visit to Egypt to discuss the French initiative for hosting an international conference “by this summer” to revive Israeli-Palestinian peace talks brokered by Washington that collapsed in April 2014.

“What we want, and that is our commitment, is to resume the negotiation process,” he told reporters at a joint news conference with his Egyptian counterpart Sameh Shoukry.

The French initiative comes at a time of mounting attacks since the start of October that have left 188 Palestinians and 28 Israelis dead.

France is worried about jihadist infiltration into the Palestinian territories on the back of “frustration” over the status quo, according to the foreign ministry.

Shoukry, for his part, said Cairo “appreciates” the French initiative, which “guarantees the legitimate rights of the Palestinian people”.

Israel had reacted angrily to Fabius’s remarks on January 29.

“This will be an incentive for the Palestinians to come and not compromise,” Israeli Prime Minister Benjamin Netanyahu said.

Fabius said that France was looking to revive plans for an international conference to “bring about the two-state solution” to end the Israeli-Palestinian conflict.

“And what will happen if this last-ditch attempt at reaching a negotiated solution hits a stumbling block?” Fabius asked.

“In that case, we will have to live up to our responsibilities and recognise a Palestinian state.”

Ayrault said on Wednesday that France’s goal was “simple — to mobilise the international community around the only possible solution, that of two states”.

“We shouldn’t exclude anything, but I don’t want to put this (recognition) as a pre-requisite,” he told reporters travelling with him to Cairo.

“Otherwise we are going to block everyone,” he said, reacting to reservations expressed by several European countries including Germany.

Ayrault later told the press conference ahead of a meeting with the Arab League’s committee on the peace process: “France wants to relaunch the peace initiative in the Middle East with the aim of hosting an international conference by this summer… if conditions are met.”

“Behind the apparent status quo lies a rapid degradation of the situation on the ground,” he said, adding that the French initiative was only at its initial stage.

“We are multiplying contacts. The road is difficult, we are aware of that, but we have to take it because nothing would be worse than not doing anything.”

Senior French diplomat Pierre Vimont is to tour Israel, the Palestinian territories and other countries in the region to discuss the proposal for an international conference.