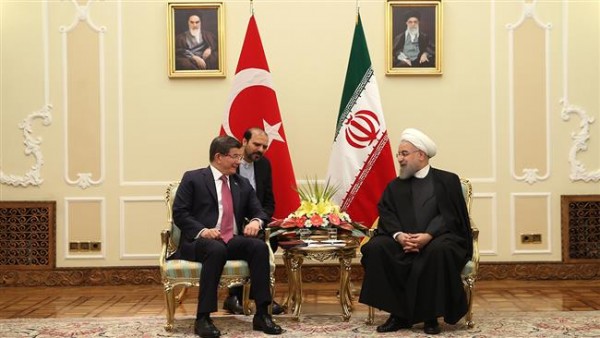 Turkey and Iran, two countries on opposite sides of Syria’s civil war, must develop a “common perspective” in order to end sectarian strife in the region, Turkish Prime Minister Ahmet Davutoglu said during a visit to Tehran on Saturday.

Iran, along with Russia, has stood by Syrian President Bashar al-Assad in the five-year war, providing him with military and financial support, while Turkey is his most outspoken critic and has backed opposition forces.

“We may have different views but we cannot change our history or our geography,” Davutoglu said, standing alongside Iranian Vice-President Eshagh Jahangiri.

“It is extremely important for Turkey and Iran to develop some common perspectives in order to end our region’s fight among brothers, to stop the ethnic and sectarian conflicts.”

Turkey is close to Saudi Arabia, which has cut its diplomatic ties with Iran and is concerned about Tehran’s growing clout in Lebanon, Syria and Yemen.

“We have our differences on some regional issues, but we are determined to manage the differences to reach stability in the region … Iran and Turkey would both benefit from regional security and stability,” Jahangiri said in remarks broadcast live by Turkey’s NTV channel and Iran’s Press TV.

The comments, days before the planned resumption of Syrian peace talks in Geneva, also reflected a will on both sides to reap trade benefits from the easing of international sanctions against Iran in January.

The removal of the sanctions means the two neighbors can easily exceed their previous trade target of $30 billion annually, Davutoglu said.

“The main obstacle that prevented us from reaching our goal were the sanctions. Being free of those, means we can easily surpass our goal of $30 billion,” Davutoglu said, adding he hoped to encourage mutual direct investment.

Trade between the two nations was $9.7 billion in 2015, according to the Turkish Statistical Institute.

Turkey has trailed other European countries eager to tap into Iran’s $400 billion economy after world powers, led by the United States, reached an agreement with Tehran last year that seeks to prevent Iran from developing nuclear weapons.

Turkey will serve as a key transit for Iranian energy supplies to Europe, Davutoglu added.