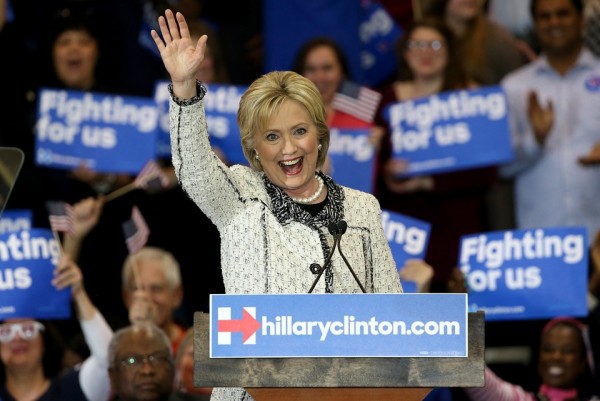 For the second straight contest, Hillary Clinton defeated Bernie Sanders, winning the South Carolina primary on Saturday. The networks called the election as the polls closed at 7 p.m., and Clinton was set to win by a huge margin—more than 47 percent, with almost all the votes counted.

The victory all but clears the way for Clinton to coast to the Democratic nomination. Clinton has won three of the first four nominating contests. The first was ever-so-close, and the second was an enormous Sanders win, but in Nevada and South Carolina, Clinton first steadied her campaign and then won decisively, and she goes to Tuesday’s large slate of primaries and caucuses with strong momentum. In her remarks in Columbia, Clinton seemed to declare the primary battle over, and she began looking ahead to the general-election battle.

“Today you sent a message that in America when we stand together there is no barrier too big to break,” she said. “We’ve now gone through four early states. I want to congratulate Senator Sanders on running a great race. Tomorrow this campaign goes national!”

She previewed a message for running against Donald Trump, reflecting his ascendancy in the Republican Party.

Clinton’s victory in South Carolina is in large part a product of her success in courting African American voters, who made up some six in 10 of those casting ballots, according to exit polls. In 2008, black voters carried Senator Barack Obama to a huge win over her, but she was able win them back, in part on her promises of continuing the president’s policies and her close association with him. Exit polls show Clinton won a stunning 84 percent of African Americans. (Black voters made up 62 percent of the vote, even higher than 2008’s 55 percent—perhaps mostly a sign of Southern whites leaving the Democratic Party.)

Sanders, meanwhile, seems to be discovering the limitations of the coalition that gave him a huge victory in New Hampshire and almost delivered him an upset in Iowa. Where there are high concentrations of white, liberal voters, Sanders runs very strongly, but in states like South Carolina and Nevada where Democrats are a more diverse bunch, he has struggled.

Clinton and Sanders tried very different approaches to courting the black vote. It was a battle between Sanders’s abstraction and Clinton’s specificity. Sanders was joined by high-profile black surrogates, including Ben Jealous, Danny Glover, and Killer Mike, but he mostly stuck to the huge rallies that have powered his campaign elsewhere, while talking at length about issues of racial justice.

Clinton, meanwhile, collected the endorsement of popular Representative Jim Clyburn. She barnstormed across the state doing a slew of small events, as did her husband Bill Clinton—who black South Carolinians seem to have forgiven for his catastrophic stumping in 2008 on her behalf. Clinton courted the black sorority Alpha Kappa Alpha. And the mothers of African American victims of violence—including Trayvon Martin, Eric Garner, and Sandra Bland—held small grassroots events in the state. During the most emotional moment in her victory speech Saturday, Clinton praised those women, saying they had “channeled their sadness into a strategy and their mourning into a movement.”

It wasn’t just black voters that made the difference on Saturday. Exit polls showed that young voters, among whom Sanders has built his base, didn’t show up in great numbers. (Even black voters younger than 30, among whom Sanders was expected to do better, went for Clinton 56-44 in preliminary exit polls.) The people who did come out said that they wanted a nominee who would continue Barack Obama’s work, rather than favoring the more liberal approach Sanders espouses.

With Saturday’s results, Clinton extends her huge delegate lead in the Democratic race. Most of her edge has been built on the large number of “superdelegates” who have committed to support her, while the two candidates were running more or less even on regular, pledged delegates won in primaries and caucuses. Clinton now has an edge on pledged delegates as well, though proportional splitting means Sanders also won some, and her lead in that tally is still small.

The result in South Carolina doesn’t seal the race for Clinton. But the problem for Sanders looking forward is that many of the states voting on March 1—Super Tuesday—look more like South Carolina than they do like New Hampshire. Sanders has been campaigning hard in Minnesota and Massachusetts, in particular, states where his campaign thinks it has a good chance. (In fact, as South Carolina slipped from his grasp this week, Sanders spent a great deal of time campaigning in Super Tuesday states rather than in the Palmetto State.)

Unless Sanders is able to learn some concrete lessons from Saturday’s primary, and unless he’s able to find a way to change the recent trend, his chance at winning the nomination will dwindle quickly. Sanders has vowed to continue his fight. His aides note that Clinton didn’t drop out after losing South Carolina in 2008, and they see two close contests so far and one huge win for each candidate. The enormous crowds he’s able to draw across the nation show there’s a willing audience. But the results in primaries and caucuses suggest that while Sanders has the firepower to shift the rhetoric and focus of the nomination battle, it’s simply not a large enough slice of the Democratic electorate to win the nod.