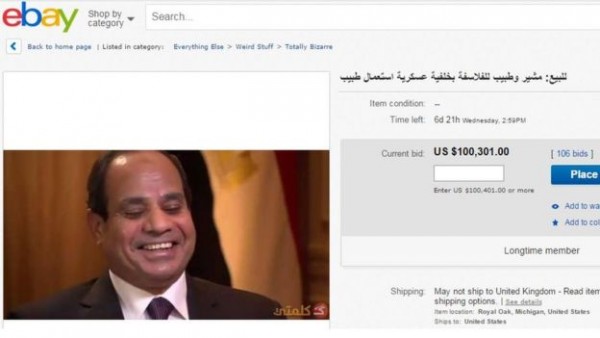 Within minutes of Mr Sisi’s comments, a listing for the sale of “a used field marshal” with a photograph attached on the president appeared on Ebay.
Share:

Attempting to show his devotion to his country, Egyptian President Abdel Fattah Sisi said he would be willing to put himself up for sale and donate the proceeds if he thought it would help the economy.

“I swear to God if I could be sold … then I would be sold,” he said in a sprawling televised speech Monday that quickly became a topic of mockery.

“Field Marshal philosopher with a military background in good shape for sale,” somebody posted in an EBay listing for the former army officer and self-described philosopher. The ad has since been taken down.

Sisi also acknowledged for the first time that terrorists had downed the Russian passenger jet that crashed over the Sinai Peninsula in October. The incident caused a steep decline in tourism, leading to a foreign currency shortage that has contributed to the country’s worst financial condition since the 2011 revolt that ousted Hosni Mubarak.

Although Sinai State, a group affiliated with Islamic State, claimed responsibility for the crash that killed 224 people aboard the Metrojet airliner, Sisi had dismissed the claim as propaganda and an investigative panel set up by the government said there was no evidence of a terrorist act.

The president said Wednesday that terrorists had brought down the plane not only to hurt tourism but also to damage Egypt’s international standing.

The speech, though, was largely about the economy, including a new development plan called Egypt 2030. Sisi urged Egyptians to contribute their own money to help lift Egypt from its woes.

The 61-year-old grew emotional as he shed a tear as he spoke about selling himself.

After the speech, thousands of Egyptians took to social media to spoof the president’s words and dramatic flair. It didn’t take lone for the hashtag #Evaluate_Sisis_speech began trending.

“Thanks Mr. President; now we have enough material to make fun of for the next month,” @Amani207 tweeted in Arabic.

@Jojo_Fawzy wrote: “Would you end my phone contract f I don’t send a morning donation sms!”

And @abooazozz1403 tweeted: “Is this a speech by the president of a country with the history of Egypt?! Putting himself up for sale like that!”

“Don’t listen to anyone but me,” he said. “I am dead serious.” He went on to threaten anyone who might try to topple the government: “I will remove him from the face of the Earth. I am telling you this as the whole of Egypt is listening. What do you think you are doing? Who are you?”

A state crackdown on political dissidents has drawn heavy criticism from local and international human rights organizations, which report that more than 300 people have disappeared and at least 16,000 more jailed as a result of political activism.