Bolivian voters tell Morales, they have seen enough of him , want change 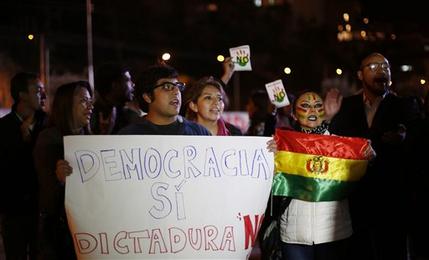 Demonstrators shout slogans against Bolivian President Evo Morales, demanding he concede, while waiting for the official results of a constitutional referendum outside a vote counting center in La Paz, Bolivia, Tuesday, Feb. 23, 2016. With 95 percent of the vote counted Tuesday, results showed 52 percent of voters rejecting Morales’ bid to change the constitution so he can run for a fourth consecutive term in 2019. Morales said Monday he was not abandoning hope despite indications Bolivians had rejected the referendum by a slim margin. (AP Photo/Juan Karita)
Share:
Bolivian voters have informed President Evo Morales that they want his current term to be his last, narrowly rejecting a constitutional amendment that would have let him run again in 2019.

It was the native Aymara’s first direct electoral defeat in a decade in power. He had previously prevailed in nationwide elections, including a 2009 constitutional rewrite, with an average 61.5 percent of the vote.

After the outcome became clear Tuesday night, celebrants poured into the streets in the eastern city of Santa Cruz, where opposition to Morales is strong. But fireworks also sounded in La Paz, where there is also weariness of official corruption.

Sunday’s ballot question was voted down 51 percent to 49 percent, with 99.5 percent of polling stations reporting, a margin of 160,000 votes. The outcome also blocks Vice President Alvaro Garcia from running again.

There was no immediate reaction from the president.

Morales is Bolivia’s first indigenous president and has changed the ethnic complexion of the landlocked Andean nation’s politics during three terms in office.

He helped lift millions out of poverty by more equitably distributing natural gas revenues, spurring the creation of an ethnic Andean middle class. He built airports, highways and the pride of La Paz, an Austrian-built aerial tramway system. He also put a Chinese-built satellite into space

But Bolivians have been losing patience with his now-entrenched Movement Toward Socialism. And many indigenous peoples who initially lauded Morales for granting them autonomy on paper lost faith when he pushed natural gas and oil projects on their traditional lands.

The referendum also closely followed a revelation that Morales, previously unscathed by scandal, may have been personally involved in influence-peddling.

“Evo’s traditional opposition among the affluent and middle class was joined by a wide swath of voters who have long been a part of his political support,” said Jim Shultz, executive director of the left-leaning Democracy Center political advocacy group.

“Their turnaround isn’t about moving rightward,” but rather a rejection of corruption and an assertion that “20 years is too long for one person to be president,” he added.

The vote count was unusually slow and the vice president claimed Tuesday morning that a right-wing conspiracy was “trying to make disappear by sleight of hand the rural vote that favors Morales.” He provided no evidence.

Organization of American States observers reported no evidence of fraud.

Early in his presidency, Morales crushed the right-wing opposition with an agenda that championed Bolivia’s long-downtrodden native majority. He expelled the DEA and a U.S. ambassador, thriving on anti-Yankee rhetoric. Morales, who leads a coca-growers union, also upset Washington drug warriors with a less violent coca-eradication program in the world’s No. 3 producer of cocaine.

But formidable opposition eventually emerged from inside his own movement and it stung in March 2015 municipal and regional elections, when opposition mayors won in eight of Bolivia’s 10 biggest cities.

“The cost of corruption has been high,” said political scientist Marcelo Silva of the Universidad Mayor de San Andres.

He said infighting in the governing party over a successor could now weaken it even further. Morales will also need to manage a challenging economy.

The unprecedented economic boom over which he presided, in which gross domestic product per capita rose by nearly a third, has now waned. Bolivia’s revenues from natural gas and minerals, making up three-fourths of its exports, were down 32 percent last year.

The vote’s timing could not have been worse for Morales.

A former girlfriend nearly half Morales’ 56 years was named sales manager of a Chinese company in 2013 that has obtained nearly $500 million in mostly no-bid state contracts. Photos of her neoclassical mansion in a wealthy southern La Paz enclave spread online.

Morales denied any impropriety and claimed he last saw the woman in 2007. But a picture of the two together last year emerged, casting doubts.

The most harmful scandal plaguing the ruling elite was the skimming of millions from the government-managed Fondo Indigena, which runs agricultural and public works in the countryside.

Judicial corruption has also been rampant, and freedom of expression suffered under Morales, with critical media and environmentalists complaining of harassment by an intolerant and overbearing state.