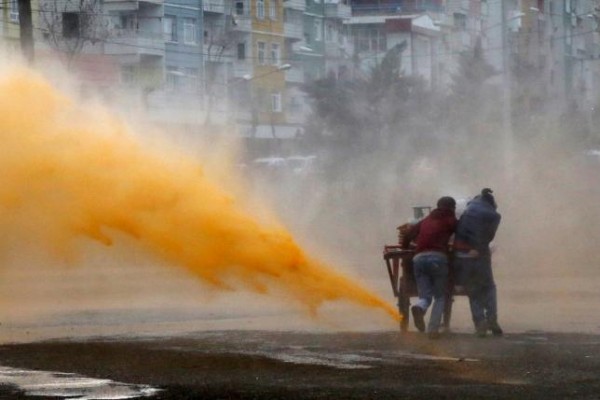 Street vendors take cover as Turkish riot police use a water cannon to disperse Kurdish demonstrators during a protest against the curfew in Sur district, in the southeastern city of Diyarbakir, Turkey February 21, 2016. REUTERS/Sertac Kayar
Share:
Turkey’s military said on Monday it had killed 14 Kurdish militants during its offensive against the outlawed Kurdistan Workers Party (PKK) in the southeast of the country.

Four PKK militants were killed on Sunday in the Sur district of the mainly Kurdish region’s largest city Diyarbakir, much of which has been under a round-the-clock police curfew since early December, the army said in a statement.

Ten others were killed on Sunday in the Idil district of Sirnak province, neighboring Syria, it said. A round-the-clock curfew was imposed in some parts of Idil last week as it become a new focus for the security operations.

Violence has surged across southeast Turkey following the breakdown of a two-year ceasefire between Turkish security forces and the PKK last July.

The PKK, which says it is fighting for autonomy for Turkey’s large ethnic Kurdish minority, has sealed off entire districts of some towns and cities in the southeast, prompting the security forces to step up their operations.

Rights groups and locals have voiced growing concern about the civilian death toll in the security operations since December. The pro-Kurdish HDP party puts the toll at nearly 160.

In its statement, the army also said the bodies of five PKK militants, thought to have been killed earlier, had been found during search operations in Cizre, a border town that was the focus of military operations for weeks.

Many home-made explosives, hand grenades, rifles and large amount of ammunition were also seized during the search.

The PKK, considered a terrorist group by Turkey, the United States and the European Union, launched its separatist armed rebellion against the Turkish state more than three decades ago and more than 40,000 people have been killed in the conflict.