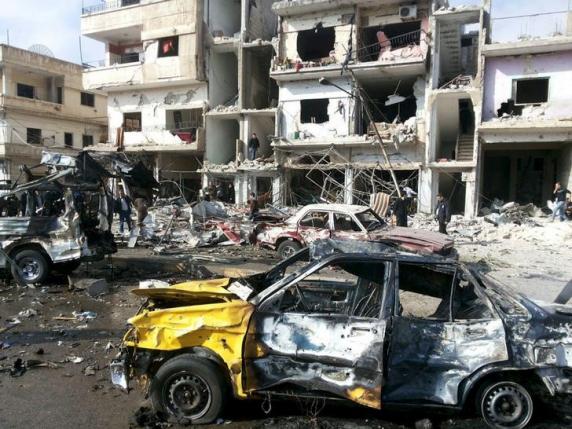 People inspect the site of a two bomb blasts in the government-controlled city of Homs, Syria, in this handout picture provided by SANA on February 21, 2016. REUTERS/SANA/Handout via Reuters
Share:

At least 46 people were killed in twin car bomb blasts that hit Syria’s Homs on Sunday in one of the deadliest such attacks in the city in five years of civil war, a monitoring group said, and state media confirmed the explosions.

At least 100 others were wounded by the explosions in the city center’s Zahra district, the Britain-based Syrian Observatory for Human Rights said.

State television quoted the governor of Homs as saying at least 25 people had been killed.

A bomb attack claimed by Islamic State last month in Homs in the west of the country killed at least 24 people as government forces took back some Islamic State-held villages in Aleppo province in the north.

Sunday’s attacks also came a day after government advances against Islamic State. There was no immediate claim from the group, however.

A bomb attack in December which killed 32 people took place after a ceasefire deal that paved the way for the government to take over the last rebel-controlled area of the city, which was a center of the 2011 uprising against President Bashar al-Assad.

Observatory director Rami Abdulrahman said the attack was the second most deadly of its kind in Homs since 2011, and the deadliest for almost a year and a half.

Violence rages on unabated across the country as world powers and the United Nations push to end the conflict, meeting in Geneva to try to broker a ceasefire.

The latest fighting in the north of the country has displaced tens of thousands of people, many of whom headed for the Turkish border. The exodus added to more than 11 million already displaced by the conflict that has claimed 250,000 lives.