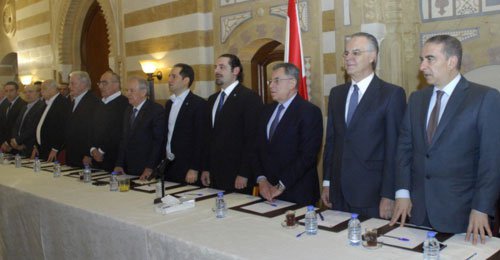 The March 14 alliance held an urgent meeting on Sunday at the center house to discuss the latest development after Saudi Arabia canceled the $4 billion grant Justice Minster Ashram Rifi resigned .
At the end of the meeting the alliance issued the following statement :

We hold Hezbollah and its allies responsible for this dangerous row with Saudi Arabia and we call on Hezbollah to withdraw from the war in Syria and the region.

“We call on the government to respect the constitution and take a firm stance that confirms Lebanon’s commitment to Arab solidarity.”

Former PM Saad Hariri warned following the meeting: “If the government doesn’t take a stance in tomorrow’s extraordinary session, we will take other decisions.”

“If Hezbollah and its allies continue – through illegitimate arms — to put Iran’s interest before Lebanon’s higher interest, that will harm Lebanon’s role and Arab belonging and presence and will eventually affect the social and economic security of hundreds of thousands of Lebanese families — from all sects — who have jobs in the Gulf,” the statement warned.

“These countries have opened their doors and arms to us during all the difficult circumstances … and had contributed to ending the Lebanese war and helping Lebanon during the 1990s reconstruction period and once again after the 2006 Israeli war on Lebanon,” March 14 added.

Holding “Hezbollah and its allies” responsible for what it called “this dangerous row” with Saudi Arabia and other problems, the March 14 coalition called on Hezbollah to “withdraw from the ongoing fighting in Syria and the region and to abide by the dissociation policy.”

Turning to the extraordinary meeting that the Lebanese government will hold on Monday morning, the March 14 forces called on the cabinet to “respect the Constitution and the resolutions of the international legitimacy,” urging it to “take a clear and firm stance confirming Lebanon’s commitment to Arab solidarity and rejecting any insult or violation of the sovereignty of any Arab state.”

“The March 14 forces reiterate their full support for the Kingdom of Saudi Arabia and the countries of the Gulf Cooperation Council in their rejection of breaches against the sovereignty or independence of any Arab country, and they reject turning Lebanon into a base for hostility against any Arab country,” the statement added.

According to media reports, LF representatives rejected any mention of the Free Patriotic Movement or Foreign Minister Jebran Bassil in the statement, which prompted the conferees to use the phrase “Hezbollah and its allies.”

The statement comes three days after Saudi Arabia decided to halt a $4 billion program for military supplies to Lebanon in protest at alleged Hezbollah policies and recent diplomatic stances by Lebanon’s foreign ministry.

In light of positions taken by Hezbollah, the kingdom proceeded to “a total evaluation of its relations with the Lebanese republic,” an unnamed official told the Saudi Press Agency on Friday.