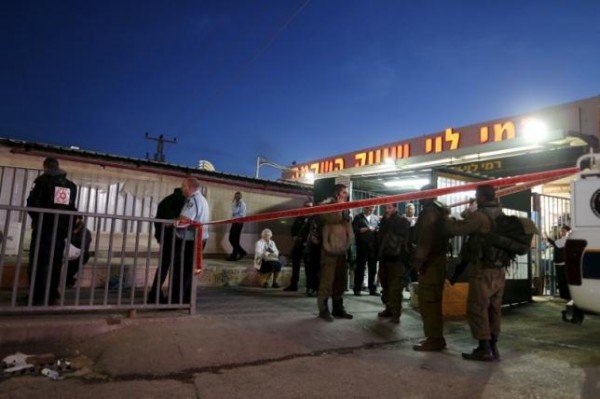 Israeli troops gather near the scene of a stabbing attack near the West Bank city of Ramallah February 18, 2016. REUTERS/Ammar Awad
Share:

Two  14-year-old Palestinians  stabbed and killed an Israeli in a packed supermarket in the occupied West Bank on Thursday, Israeli and Palestinian officials said, as a five-month wave of bloodshed shows no sign of abating.

An armed civilian shot the two teens, who were taken for treatment at Israeli hospitals in Jerusalem, the Israeli military said. Palestinian officials said both were 14.

A witness named only as Uziel told Army Radio the supermarket was packed at the time with Israeli and Palestinian shoppers.

“We heard screaming and it was clear there was an attack … Civilians and soldiers began running and shot one (attacker) … and then the another,” he said. “Everyone was shocked at how young they were.”

The Israeli killed in the stabbing was 21 years old, a police spokesman said. A second Israeli was also stabbed and was in a moderate condition in hospital, an official there said.

Since the spate of violence broke out in October, stabbings, shootings and car rammings by Palestinians have killed 28 Israelis and a U.S. citizen.

Israeli security forces have killed at least 163 Palestinians, 107 of whom Israel says were assailants, while most others were shot dead during violent anti-Israeli protests.

Many Palestinian attackers have been teenagers.

Tensions have been fueled by factors including a dispute over Jerusalem’s al-Aqsa mosque compound and the growth of Jewish settlements on land Palestinians seek for an independent state.

Palestinian leaders have said that with no breakthrough on the horizon, desperate youngsters see no future ahead. Israel says young Palestinians are being incited to violence by their leaders and by Islamist groups calling for Israel’s destruction.