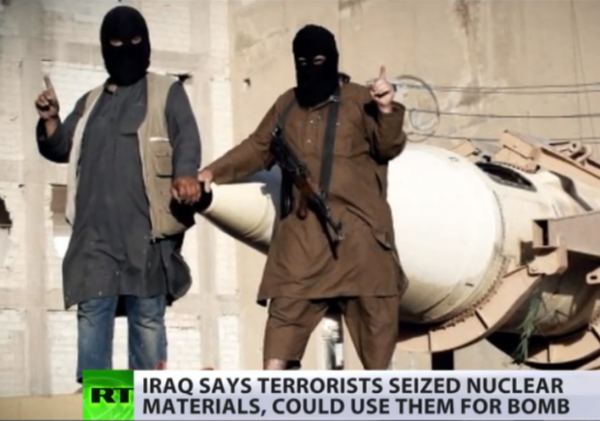 Iraq has notified the United Nations in October 2014 that the Islamic State militants seized nuclear material from a university in the northern city of Mosul l
Share:
Iraq is searching for “highly dangerous” radioactive material stolen last year, according to an environment ministry document and seven security, environmental and provincial officials who fear it could be used as a weapon if acquired by Islamic State.

The material, stored in a protective case the size of a laptop computer, went missing in November from a storage facility near the southern city of Basra belonging to U.S. oilfield services company Weatherford (WFT.N), the document obtained by Reuters showed and officials confirmed.

A spokesman for Iraq’s environment ministry said he could not discuss the issue, citing national security concerns. A Weatherford spokesman in Iraq declined to comment, and the company’s Houston headquarters did not respond to repeated requests for comment.

The material, which uses gamma rays to test flaws in materials used for oil and gas pipelines in a process called industrial gamma radiography, is owned by Istanbul-based SGS Turkey, according to the document and officials.

An SGS official in Iraq declined to comment and referred Reuters to its Turkish headquarters, which did not respond to phone calls.

The document, dated Nov. 30 and addressed to the ministry’s Centre for Prevention of Radiation, describes “the theft of a highly dangerous radioactive source of Ir-192 with highly radioactive activity belonging to SGS from a depot belonging to Weatherford in the Rafidhia area of Basra province”.

A senior environment ministry official based in Basra, who declined to be named as he is not authorized to speak publicly, told Reuters the device contained up to 10 grams (0.35 ounces) of Ir-192 “capsules”, a radioactive isotope of iridium also used to treat cancer.

The material is classed as a Category 2 radioactive source by the International Atomic Energy Agency, meaning if not managed properly it could cause permanent injury to a person in close proximity to it for minutes or hours, and could be fatal to someone exposed for a period of hours to days.

How harmful exposure can be is determined by a number of factors such as the material’s strength and age, which Reuters could not immediately determine. The ministry document said it posed a risk of bodily and environmental harm as well as a national security threat.

Large quantities of Ir-192 have gone missing before in the United States, Britain and other countries, stoking fears among security officials that it could be used to make a dirty bomb.

A dirty bomb combines nuclear material with conventional explosives to contaminate an area with radiation, in contrast to a nuclear weapon, which uses nuclear fission to trigger a vastly more powerful blast.

“We are afraid the radioactive element will fall into the hands of Daesh,” said a senior security official with knowledge of the theft, using an Arabic acronym for Islamic State.

“They could simply attach it to explosives to make a dirty bomb,” said the official, who works at the interior ministry and spoke on condition of anonymity as he is also not authorized to speak publicly.

There was no indication the material had come into the possession of Islamic State, which seized territory in Iraq and Syria in 2014 but does not control areas near Basra.

The security official, based in Baghdad, told Reuters there were no immediate suspects for the theft. But the official said the initial investigation suggested the perpetrators had specific knowledge of the material and the facility: “No broken locks, no smashed doors and no evidence of forced entry,” he said.

An operations manager for Iraqi security firm Taiz, which was contracted to protect the facility, declined to comment, citing instructions from Iraqi security authorities.

A spokesman for Basra operations command, responsible for security in Basra province, said army, police and intelligence forces were working “day and night” to locate the material.

The army and police have responsibility for security in the country’s south, where Iranian-backed Shi’ite militias and criminal gangs also operate.

Iraqi forces are battling Islamic State in the country’s north and west, backed by a U.S.-led coalition. The militant group has been accused of using chemical weapons on more than one occasion over the past few years.

The closest area fully controlled by Islamic State is more than 500 km (300 miles) north of Basra in the western province of Anbar. The Sunni militants control no territory in the predominantly Shi’ite southern provinces but have claimed bomb attacks there, including one that killed 10 people in October in the district where the Weatherford facility is located.

Besides the risk of a dirty bomb, the radioactive material could cause harm simply by being left exposed in a public place for several days, said David Albright, a physicist and president of the Washington-based Institute for Science and International Security.

“If they left it in some crowded place, that would be more of the risk. If they kept it together but without shielding,” he said. “Certainly it’s not insignificant. You could cause some panic with this. They would want to get this back.”

The senior environmental official said authorities were worried that whoever stole the material would mishandle it, leading to radioactive pollution of “catastrophic proportions”.

Two Basra provincial government officials said they were directed on Nov. 25 to coordinate with local hospitals. “We instructed hospitals in Basra to be alert to any burn cases caused by radioactivity and inform security forces immediately,” said one.