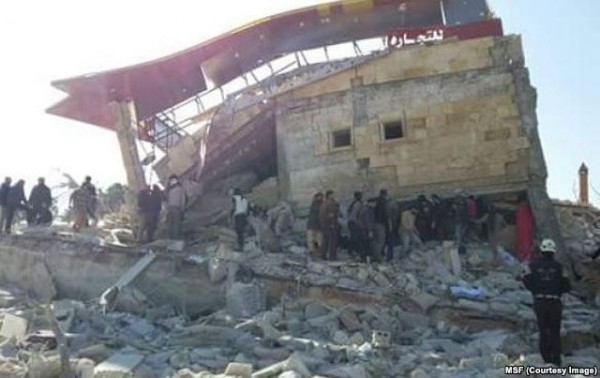 The hospital in Idlib province was targeted in an airstrike that one rights group said was ‘presumably Russian’
Share:

At least 23 people were killed when missiles hit three hospitals in rebel-held Syrian towns on Monday, including a hospital supported by medical charity Doctors Without Borders.

Doctors Without Borders (also known as Médecins Sans Frontières, or MSF) said the hospital it supported in Murat al-Numan in the northern province of Idlib was “deliberately” struck by four missiles.

“There were at least seven deaths among the personnel and the patients, and at least eight MSF personnel have disappeared, and we don’t know if they are alive,” said Mego Terzian, head of the charity’s French branch.

MSF said the hospital near Murat al-Numan in the northern Syrian province of Idlib was struck by four missiles during two air raids.

“The author of the strike is clearly […] either the government or Russia,” Terzian said, adding that it was not the first time MSF facilities had been targeted in the country.

The hospital, which has 54 staff and holds 30 beds, is financed by the medical charity. MSF also supplies medicines and equipment to the facility.

“This is a deliberate attack against a health establishment,” said Massimiliano Rebaudengo, MSF head of mission. “The destruction of this hospital deprives about 40,000 people of healthcare in this conflict zone.”

The Syrian Observatory for Human Rights, which tracks violence across the country, said another strike hit the National Hospital on the town’s northern edge, killing two nurses.

In a separate attack, at least 14 civilians were killed when missiles hit a children’s hospital, a school and other locations in the rebel-held Syrian town of Azaz near the Turkish border on Monday.

According to a medic and two residents, at least five missiles hit the hospital in the town centre and a nearby school, where refugees fleeing a major Syrian army offensive were sheltering.

“We have been moving scores of screaming children from the hospital,” said medic Juma Rahal. At least two children were killed and ambulances ferried scores of injured people to Turkey for treatment, he said.

A resident said another refugee shelter south of the town was also hit by bombs dropped by jets believed to be Russian.

The town of Azaz lies on a corridor stretching from the Turkish border to the contested city of Aleppo. The corridor is the last supply line for Syrian rebels stranded in Aleppo.

Though it is currently held by Syrian rebel forces, Azaz faces multiple threats, including from Assad loyalists in the south and Syrian Kurds in the west.

A recent advance by Kurdish YPG forces prompted cross-border shelling from Turkey, which continued for a third day on Monday.

The YPG’s advances have raised deep concern in Ankara, which accuses the Syrian Kurdish group of ties to the outlawed Kurdistan Workers Party (PKK), based in Turkey.

Turkish officials, who support the rebels controlling Azaz, have said they will not allow Kurdish forces to seize key areas along the border.

The move drew fierce criticism from Russia on Monday, which said Turkey’s “provocative” shelling was “creating a threat to peace and security in the Middle East and beyond”.