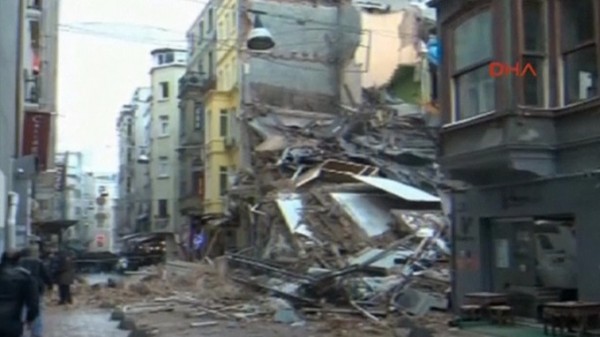 Two buildings collapsed in central Istanbul on Friday, sending a haze of dust through one of the city’s busy tourist districts, but officials said no one was believed to have been injured.

The immediate cause of the collapse was unknown. The buildings, at least one of which was five storeys tall, were in a street off of Istiklal Avenue, in a district of old buildings and shops popular with tourists and locals.

No one was believed to have been killed or injured, Istanbul Governor Vasip Sahin told CNN Turk.

The mayor of the local Beyoglu district said one of the shops, a meatball restaurant, had been closed for construction and that the building work may have triggered the collapse.

A police officer at the scene told Reuters there were reports that one of the buildings shook before it started to collapse, giving those inside a chance to run outside.

Waste removal workers were going through the debris and the area was cordoned off.